PREVIEW
I came to realize the recent comment by the MM does actually makes sense.

Don't draw your guns at me because I'm not referring to those content of those comments, but I drawn this conclusion after a brief chat with a co-worker of my over the discussion of the upcoming Lions' Asian Cup Qualifier fixture against Iran. 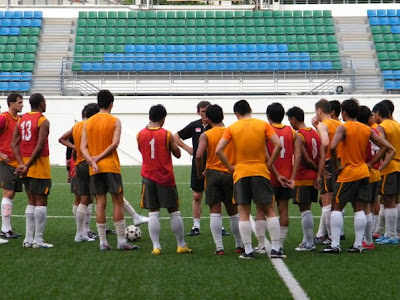 These guys need your support not sticks from some irresponsible layabouts.
"I don't think Singapore have a chance..."said this middle-aged colleague of my, simply because the opponents are the mighty Iranians he concluded.

Well, that's enough said I think people who made these irresponsible comments shouldn't be welcomed at Kallang on Wednesday, and we will never appreciate their presence either... so please stay away and remain inferior for the rest of their life.

As the MM says Singaporeans have become "less hard-driving and hard-striving." and I'm not sure if my co-worker actually fallen into the mentioned category?

The lack of confidence and the absence of self-belief to better things before the ball is kick irked me most.

AFTERMATH
The fans failed to respond to Hariss Harun's plead to turn out in full force for this do-and-die battle. 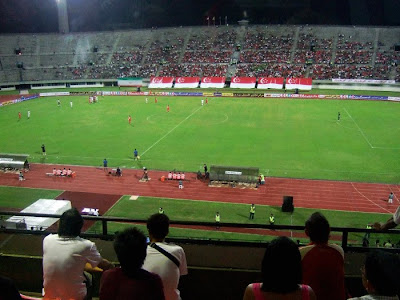 7,656 was the official attendance for this crucial game, as one of my co-workers declared that, "I will watch the game from the comfort of my living room!" since there was a live telecast of the match on TV.

Which sometimes I wonder why would the fans be bother turn up at the stadium when the match was televised live in a land area of 710.2 km2 (unless there's a need for it- like the match being sold-out in the first place)?

While at the ground, I urged some of those I know to do something they did in the past and it was turned down flatly.

"How to cheer them (the Lions) when they are playing badly?" said one of those I met at the ground.

Whether did we played badly, opinions vary as I personally felt we gave a decent performance to the widely-perceived mighty Iranians, but what irked me most again is yet another disappointing "cold-shoulder" treatment given by the majority of the spectators to the Singapore National Team (noted the word I used "spectators" instead of fans). 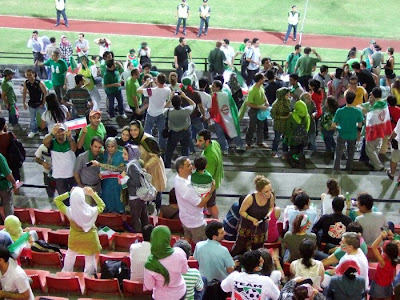 Yet again I had a feeling that I was at Tehran, not at Kallang just now... thanks to these Iranians fans
Merely because the spectators had forgotten what were they there for at the ground, just as a paying customer to expect a decent display of football?

If that is the case most of time, I'm sad to say the whole approach of the game by these spectators is wrong.

As what the earlier quoted, only when the Lions perform well - they will cheer, then if they fail to lift up the performance, they don't deserve a hoot lah!

I think these spectators have a tendency of blaming everyone but themselves.

It just like watching your kids playing, if the parents merely stand by the side without any word of encouragement or cheering during the game, so where is the motivation to spur one on?

I'm not saying the Lions are like young kids, but that's the simple logic which these spectators failed to realize it.

Maybe for the time being, I should call them SPECTATORS, not FANS simply because they don't deserved it.

THE SHORT SCRIBE OF THE MATCH
The bone of contention was the awarding of the penalty kick to the Iranians in the 10th minute, which from where I saw was legally won by defender Precious Emuejeraye but referee thought the otherwise and saw Hadi Aghily blasted the visitors to the front in the 11th minute. 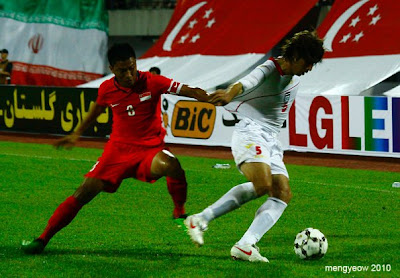 Skipper Noh Alam Shah (left) scored the only Lions' goal of the night (Picture Credit: Gan Meng Yeow)
That goal must had shaken the confidence of the Lions, whom till that stage were holding themselves well against the visitors, that Raddy's boys saw themselves conceded the second a minute later, after a wayward pass by Fahrudin Mustafic allowed M Madanchi to fit into the grove to slot home following the failure of Emuejeraye to contain the nippy midfielder.

Skipper Noh Alam Shah reduced the deficit in the 32nd minute with a header off Shaiful Esah's corner, but the failure to recover fast enough from a botched corner allowed Iran to counter and restored the two-goal advantage with a G Rezaei's strike in the 63rd minute.

THE PICTURES FROM THE PRESS CONFERENCE 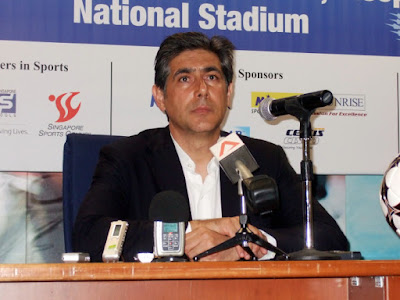 Iran's coach Seyed Afshin Ghotbi (pictured above) felt that from his position where he was, it was a 100% penalty (occurred in the 10th minute), although he was diplomatic enough to add that "perhaps video replay may tell a different story".

"What I saw was two hungry Lions (as both teams are nicknamed the Lions) fighting in the match, I'm proud with the fact that my team had scored some wonderful goals and tactical we executed very well in the game." said coach Ghotbi.

"Although, I felt that we lost concentration after scoring two goals and we dropped back to allow Singapore to fight back." he added while acknowledged the Lions are dangerous in "dead-ball" situation. 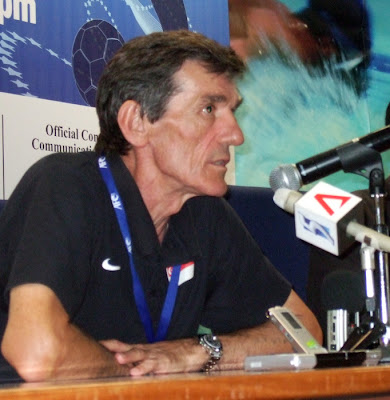 Coach Raddy (above) labelled the 10th minute penalty decision by the referee as "disastrous" , and felt "we were too much hurry and made too many mis-passing in the game" that allowed the Iranians to punish us.

Whilst he felt all players must be on their best in every game he playing, and it doesn't matter the size of the attendance, when asked if he's disappointed with the low turn-out for this mid-week fixture.

Looking ahead the Jordan game, Coach Raddy felt "we are ourselves' biggest enemy" and the lack of a playmaker to spread out the passes is one of the problems he's facing. 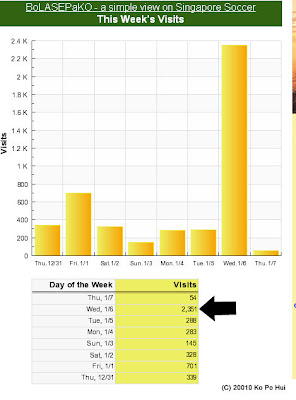 Many thanks to the 2,351 visitors who surfed to this blog, thanks but hopefully the next record will be broken when we win a game...
logged down by Ko Po Hui at 01:06:00