By Ko Po Hui January 05, 2010
On the eve of the crucial Asian Cup Qualifier tie against one of Asian football powerhouses - Iran, national midfielder Hariss Harun shares his thoughts on tomorrow's game. 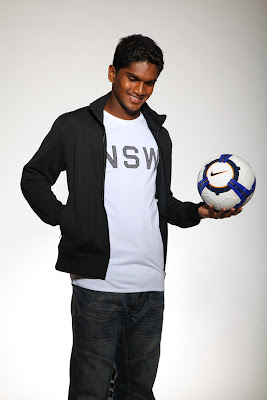 Hariss is an ambassador for the Nike RED campaign
Hi Hariss, thanks for taking the time out of your busy training schedule to speak to us. To start, what are your thoughts on the game against Iran on January 6?
"It’s a crucial game; the group is wide open. All four teams have a very good chance of qualifying. With Iran being one of the best in Asia, it’s important for us to get a positive result."

What does Singapore need to bring against them?
"We have to be tighter defensively. In terms of ball possession, we have to be more aggressive; we can’t afford to hold the ball and be too scared to play it.

That’s what teams like Iran and Oman are doing – they’re not afraid to play and get more aggressive with the ball. We should bring their game to them."

Is that why we lost to Oman?
"We’re trying to sort out what happened, but I think there were some lapses in concentration and a bit of miscommunication and frustration during the game. Nobody likes to concede goals, especially ones that could have been avoided."

What else have we learnt from that loss?
"The coach has told us that we should also be playing Oman’s game, with more movement, because when there’s more movement, there’re more options with what you can do with the ball and your team mates."

Have we benefited from the games with Oman?
Well, Iran’s style of playing is similar to Oman, so mentally we have a better idea of what to expect. It’s just more about how we’ll shape up physically and tactically. 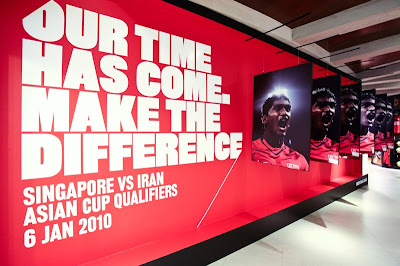 Hariss's image being featured at the Nike Flagship Store at Wisma Atria.
What’s the sentiment of the team? Is it a do-or-die situation?
"We have two more games, but the coming Iran game is our last one in Singapore, so we have to make the most of the home advantage.

I really hope our supporters turn up in full force at Kallang. In terms of the game itself, you could call it do-or-die.

Like the previous game against Thailand in Bangkok, our backs were against the wall but we were able to step up to the challenge. The results speak for themselves. We’re looking at the Iran game in a similar way."

How do you feel you performed against Oman?
I have to improve on my combination of passing and play with my team mates.

I think some of us were in pre-season, coming off holidays, so we were still a little shaky.

It’s not an excuse, but during mid-season, you have your momentum and match fitness built up already. It’s part and parcel of any footballer’s career, and it’s something we all have to work on."

(P.S: The copyright of the images depicted in this blog entry belong to Nike.)