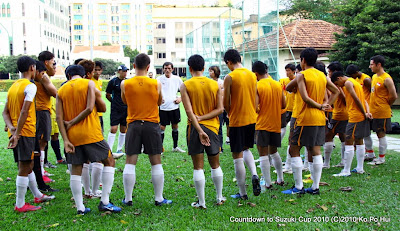 Coach Raddy (in white T-shirt) briefing the players.
With the regional crown jewel - AFF Suzuki Cup, just around the corner, the National Team get down to business as soon as the domestic S.League completed its 2010 fixtures.

At their usual Geylang Field training base, the Lions are being grouped together with those plying their trade in the Indonesian Super League (ISL)under the watchful eyes of Coach Raddy Avramovic who is assisted by former internationals Robin Chitrakar, Lee Bee Seng (goalkeeper coach) and sports trainer Aleksandar Bozenko. 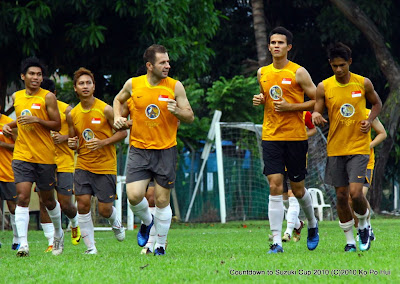 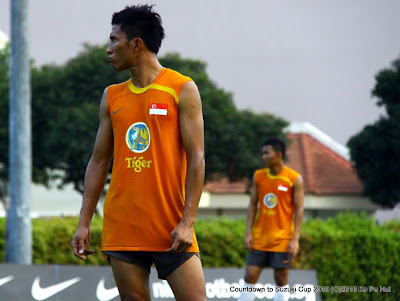 Another ISL-based star - striker Noh Alam Shah (in foreground) in full alert.
The Lions will begin their Suzuki Cup campaign on the 2nd of December against the Philippines at Hanoi, prior to that I was informed details of the scheduled friendly before heading to Vietnam is to be finalized, stay tuned...

FOR MORE PICTURES FROM THIS TRAINING SESSION, PLEASE CLICK HERE.
logged down by Ko Po Hui at 22:45:00