Shahril is the toast of the town at the "Awards Night" 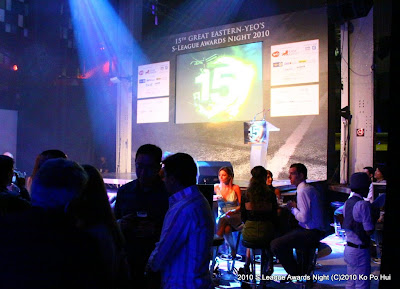 This year's S.League Awards Night was held at the St James Power House (a nice shift again from their traditional venue from the Mediacorp theatre). 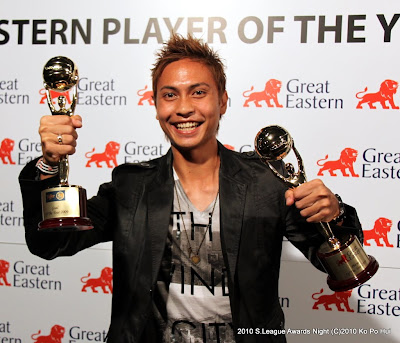 To cap his inspiring performance for his former club Home United before his departure to Indonesian League, national skipper Shahril Ishak is named as the Player of the Year, on top of the "Goal of the Year" accolade he received earlier in the evening. 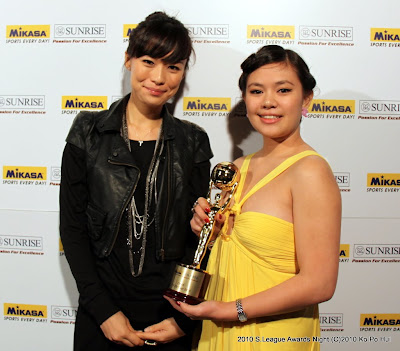 Coach Vorawan's daughter Parawan (pictured above right) received the award on her dad's behalf, posing for this shot with presenter Mediacorp artiste Rebecca Lim.
Despite the agony of losing both league title and Singapore Cup by slim margin, Tampines Rovers' coach Vorawan Chitavanich is being awarded his third "Coach of the Year" award for his effort this season. 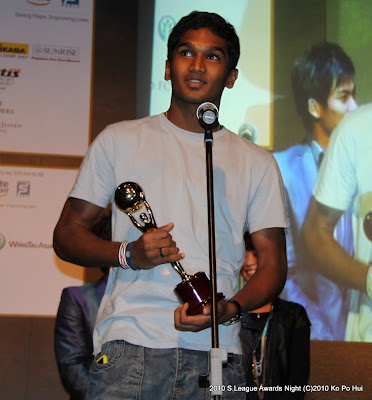 While the first award of the night - "Young Player of the Year" was given to national midflelder Hariss Harun (pictured above while receiving the award on the stage). 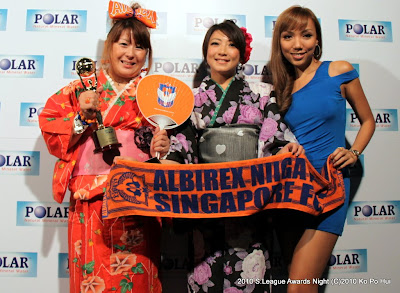 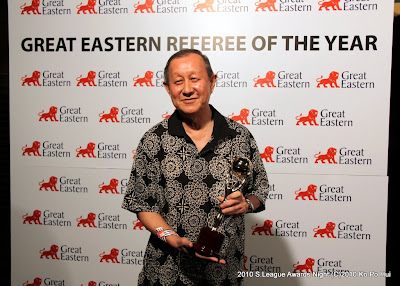 REFEREE OF THE YEAR - ABAS DAUD
Referee Committee Chairman Mr Jeffrey Beh (pictured above) danced his way up to receive the award on Abas Daud's behalf, as he was the one "who sent him overseas (to officiate a match)." 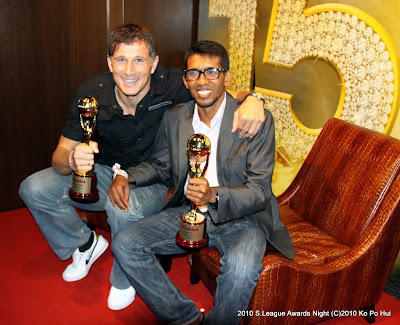 HONOURING THE GOAL-KINGS
Tampines Rovers and Lions striker Aleksandar Duric (pictured above left) ended the season by scoring his 307th S.League career goal and is duly awarded with a commemorative trophy to mark this unique achievement.

While his former SAFFC team-mate, Noor Ali (pictured above right) joined the exclusive "centurions" club by scoring his 100th as well this S.League which he quipped, "It took me 15 years to score 100 goals" during a chat with the media. 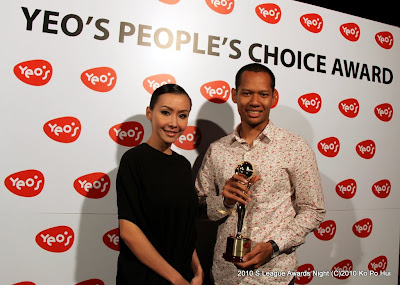 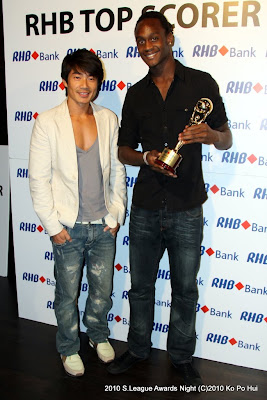 TOP SCORER OF THE YEAR - FRED MENDY
Fred Mendy was the League Champions Etoile FC's only representative on the winners' list as he went up on stage to collect the season's top scorer's award from presenter Mediacorp artiste Adam Chen.

FOR MORE PICTURES FROM THE AWARDS NIGHT, PLEASE CLICK HERE.
logged down by Ko Po Hui at 00:33:00