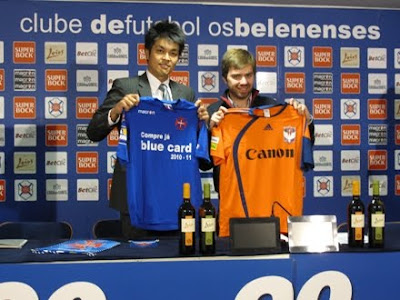 Under the terms of the agreement between the two, Albirex (S) will send one or two players to CFB for a two-week trial annually.

CFB will in-turn have the priority to sign these players should any of them meets the club’s requirements with 20-year-old midfielder Tatsuro Inui will be the first player to attend such trial scheduled from 6 Dec.

In a statement released by the club, chairman Mr Daisuke Korenaga said: “We are very proud and honoured to have Clube de Futebol Os Belenenses , a club rich in history and success in Portuguese football, as our partner.

"The partnership would spur our players in Singapore to perform well so that they can get the chance to go on to the bigger stage in Europe.

This partnership would also help us to recruit quality players in Japan to come to play in Singapore, thus improving the standard of play in the S.League.”

According to club manager Mr Koh Mui Tee, the points illustrated by Korenaga should serve as a motivation to inspire players to perform better on the field, while added this first of its kind club-to-club collaboration in Singapore football is solely between the J-League club's feeder side and CBF.

"(Our) parent club (Albirex Niigata) is aware of our partnership agreement with Belenenses but they are not involved in the setting up and negotiation stages." added Koh.