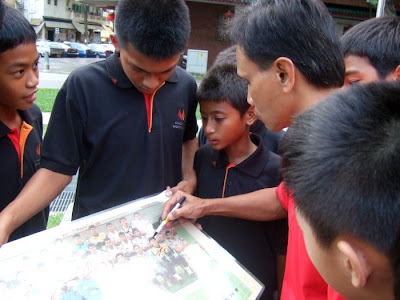 The "Super-sub" of the late 80s - Abdullah Noor signed on the 1990's poster (25th May 2009)
"Don't take my picture!!" said Abdullah Noor when I bumped onto him just now outside the Jalan Besar Stadium.

But when he saw the priceless poster, he was surprised and asked how and where I got it.

Having told him the story, he duly signed the 1990's poster with admiration from his students.

"Can make ONE copy for me or not" said the former Balestier Khalsa, ex-Sengkang Marine coach before parting off. 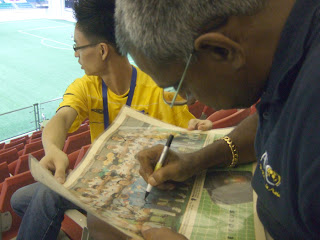 A tip-off just now from my friend, Mr Ong Jiing Yih saw me at the Jalan Besar Stadium not for the game but to grab hold of former national coach, Vincent Subramaniam's signature on the 1990's poster (Vincent was the assistant to Robin Chan then). (29th May 2009) 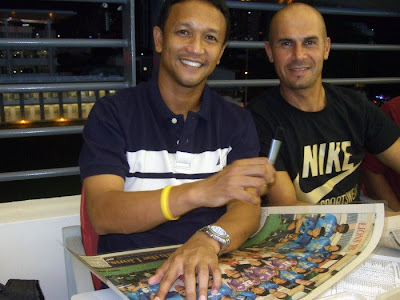 But the coup of the night - yes, right in front of your eyes - the "twin-terrors" that struck fear in any defence and rocked the whole Kallang and Singapore whenever one of them scored - Fandi Ahmad and Abbas Saad. (29th May 2009)
logged down by Ko Po Hui at 23:00:00