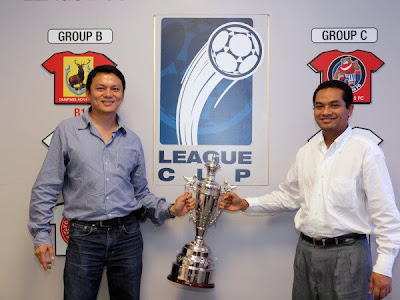 The Groupings as follows:
The top two sides in each group will progress into the quarter finals. The four teams who finished at the top of last season’s S.League competition, SAFFC, Super Reds, Home United and Tampines Rovers, were seeded and were drawn to helm the separate groups.

This season’s League Cup, which kicks off on June 1, will be the first to be shown live on cable television with 13 of the 20 matches broadcast live on the Football Channel (Channel 27).

(P.S: The main picture and part of the text were extracted from the official FAS press release.)
logged down by Ko Po Hui at 21:09:00