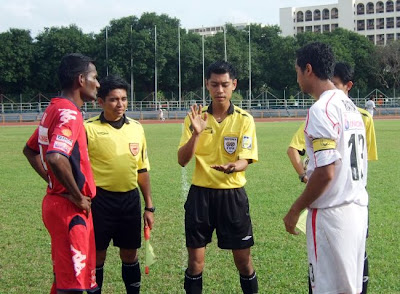 Something referee can't be wrong with - deciding who kick off as it's the coin that determine
It's something never happened before but now it's being brought to the limelight after the chairman of Tampines Rovers, Mr Teo Hock Seng, had decided to voice out as he can't take it anymore.

"The standard of football is improving but not the referee's!" as he lamented to the media.

Certainly, one has to put themselves in Teo's shoes to feel that sense of bitterness after some refereeing decisions marred the outcome of the Stags' encounters against the uniformed duo that severely did unnecessary damages to their title challenge. 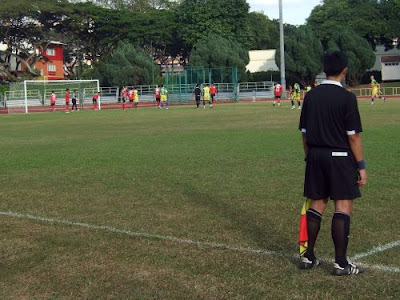 Match officials may not necessary have the best view like some fans do
Ironically, it was some dubious decisions took place centerstage as well in their victory over Woodlands Wellington (judging from the strong reactions from the benches and the terraces) on Monday.

Suddenly, it just triggered an open discussion that would normally kept "off-record" in the past and everyone is more than willing to voice their opinions (like one former match official complained the lack of communication between relevant parties made him quit the game officiating).

Clearly, one thing for sure that not just the "three wise men" on the field being scrutinized but also those referee's assessor as well. 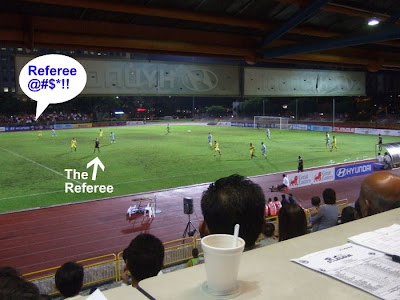 When verbal abuses were hurled at, the referees and linesmen could only "buat bodoh" (feign ignorance)
Questions been asked how and what effectiveness does these assessors served when there's been hordes of feedback (sounded nicer in this instance than the "c" word) about the refereeing standard.

Perhaps it is because since the formalization of the rules of the game, the referee's decision is final and undisputed that it's almost an "unwritten rule" that nobody should questioned his authority during the match.

However, one must bear in mind that nobody is perfect and same goes in the referee's case, unfortunately, with the "unwritten rule" in place that's no way one can squeeze details out from the referee's mouth when questioned (except behind close-doors?)

And welfare and well being of that of match officials should be taken care of as I still can't believe what I witnessed at Clementi Stadium when two match officials went to the public toilet during the half-time interval! (Good thing, nothing hotly-disputed took place then if not can't imaging how those errant punters might react if saw them sharing the same sanitary facilities with them.) 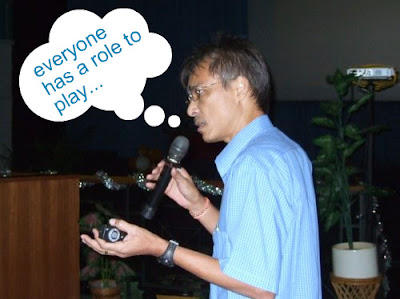 Kudos to the league authority for being swift to make its stand clear that it will not tolerate poor refereeing standard.

Now with the assurance that this age-old issue will be looked into, let's hope concrete action can be taken to stop the rot.

If not, it's not just the low standard of play that keep the fans away but the undesirable refereeing of the game that would throw the game into dispute unintentionally.

At the end of the day, a firm established channel for interaction must be installed to let everybody highlight any problem or issue, rather than having like an one-way street, as perceived at this moment - only INPUT NOT OUTPUT.
logged down by Ko Po Hui at 15:29:00

Email ThisBlogThis!Share to TwitterShare to FacebookShare to Pinterest
Classifed as: referee, S.League