"Tonight there seems to be more China supporters than the locals...."

By Ko Po Hui November 15, 2011
Decent first half defensive display by the Lions until the sucker punch that came in the 42nd minute to see the well placed grounder by Yu Hai (pictured below foreground) to give the Chinese the headstart before end of the first period. 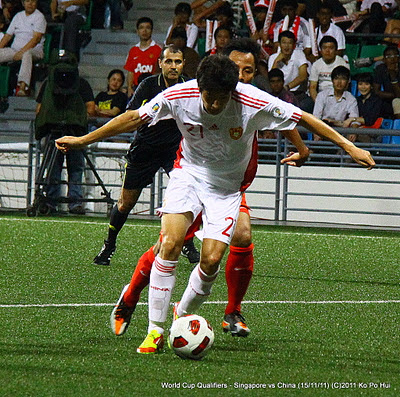 As what they always said in football that conceding a goal at this juncture of any game would have a psychological demoralizing effect on team that conceded that goal.

That is the kind of curse that seemed to haunt the Lions soon after the game restart when the Chinese skipper Li Weifeng's header sunk home in the 55th minute.

Despite having a man sent off that gave them numerical advantage, the Lions failed to capitalize and eventually allowed the visitors to tap in two more goals to seal the deal. 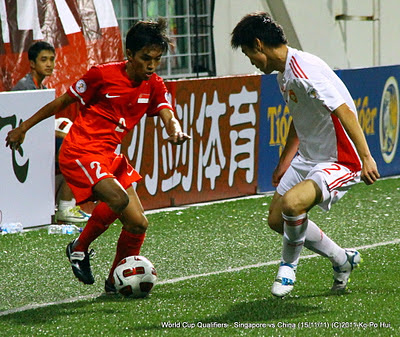 Despite the downside of the result, Home United's striker Firdaus Idros (pictured above on left) was singled out during the post match media conference by assistant coach V Sundramoorthy as one of those who performed well.

The former Singapore striker also added:"Tonight there seems to be more China supporters than the locals and I think we need to work very hard to bring them back to the stadium."