By Ko Po Hui November 27, 2011
To many at the game just now at Bishan Stadium, they jolly well knew that Home United's title fate was no longer in their hands after they lost to their closest rivals Tampines Rovers nights ago that saw they being dislodged from the top of the table.

Still to the recently crowned Singapore Cup winners, they remained focused with their task tonight and went on to beat a depleted Geylang United 5-0 before collecting the league runners-up cheque of $75,000 and medals from the guest of honour, Mr Sarjit Singh who is the honorary treasurer of the FAS at the end of the night.

Although, one can't help but feeling sorry for the visitors who were playing their first game after more than a month break due to the rescheduling of the league fixtures and resulted them fielding a number of fringe players after having to release three of their imports - Jeon Byung Euk, Daniel Hammond and Yuta Nakano following the fulfilment of their contractual obligation. 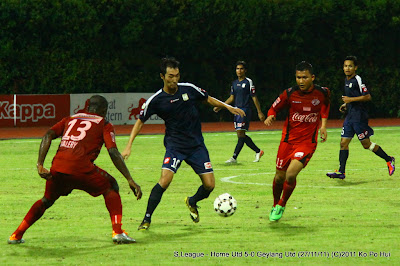 While the remaining foreigner - Kim Jae Hong (pictured above second from left) combined decently with national striker Hafiz Rahim upfront, they failed to prick through the brick-like defence of Valery Hiek, Kenji Arai, Rosman Sulaiman and relatively left Protectors' custodian Lionel Lewis alone for the large part of the game.

When asked after the game if this was a successful season for him personally, Home United coach Lee Lim Saeng felt others are in a better position to judge his performance rather than having himself to assess his record this year. 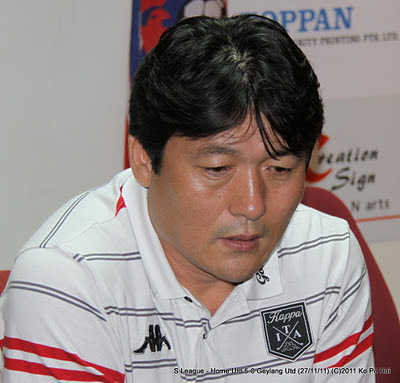 "It's a difficult for me at first when I first arrived in Singapore (last year), as it was a totally different environment from where I was." said coach Lee (pictured above) in the post match press conference held in the club office.

"And that's why I trying to change the mindset of my players to make them work harder, I'm happy some of them responded well and like the case of Firdaus Idros who was called up to the national team recently that I hope for more players to follow up as well." added the Korean coach who recently inked a renewal with the club for another two years. 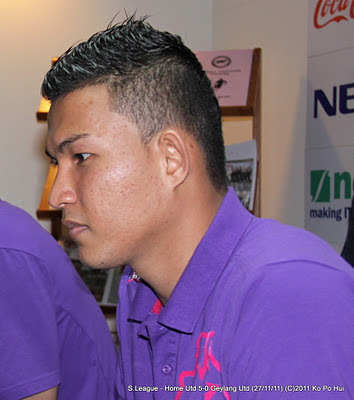 The game tonight also signalled the end of the national midfielder Isa Halim's (pictured above) involvement with the Bishan-based club as he embarked to his next career move with the M-League bound Singapore Lions squad.

"It's a wonderful three years for me with this club that has been like a family to me and everybody in Home United is so close to each other.

"On a personal note, it's disappointing to lose the league title by one point in a season we had been performed consistently well, but I'm glad that we did won the Singapore Cup being the first title for the club in six years." said Isa.

The other match at Tampines Stadium saw Tampines Rovers beat Balestier Khalsa with the similar scoreline to clinch the League title.