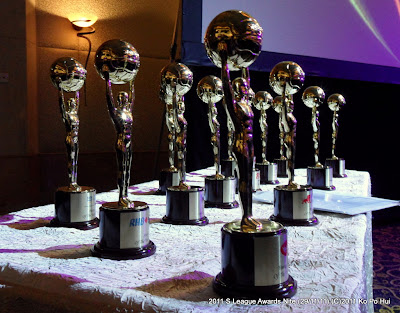 The year's award night was held on the following evening after the last three games were completed on the previous night at Grand Copthorne with the usual gala setting for this annual get-together for the local football fraternity.

The night kicked off with the awarding of the "Young Player of the Year" to Albirex Niigata (S)'s Tatsuro Inui beating the likes of Lions stars Hariss Harun and Safuwan Baharudin. 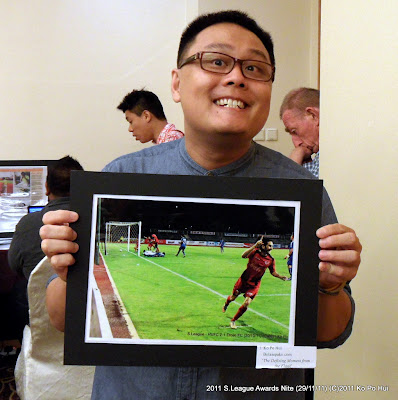 This blog's entry titled "The Defining Moment from the Flank" (pictured above hold by the blogger) was among the nominees for the "Picture of the Year" that eventually went to TNP's Benjamin Seetor's "Tampines Trip Up" (P.S: Benjamin is standing behind the blogger on the left of the picture above). 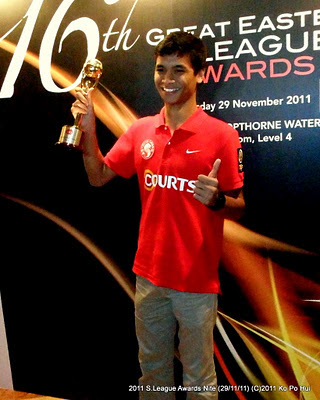 Upstart Safuwan (pictured above) did eventually make up for the earlier disappointment by walked away with the "People Choice" award, a honour that was decided by online voting. 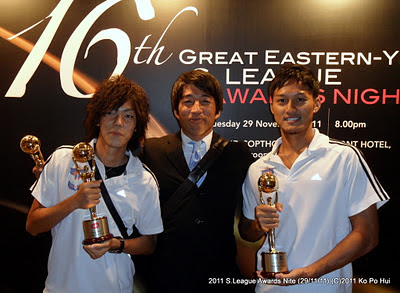 Having steered the White Swans to two successive Cup finals and clinched the League Cup along the way had set the mood right for Albirex's Koichi Sugiyama (pictured above center, with Tatsuro Inui on the left and skipper Shimpei Sakurada on right) claimed the "Coach of the Year" accolade.

Capping his relatively successful debut season for SAFFC, Croatian striker Miroslav Karoglan (pictured above) scored a double on the glittering evening with the "Player of the Year" on top of receiving his "Top Scorer of the Year" award in the same ballroom.
logged down by Ko Po Hui at 01:06:00