[Feature] The Braveheart Siva (PART ONE)

By Ko Po Hui June 17, 2011
(This is part one of the three-parter series that featured a story of Singaporean footballer who overcome the odds in bid improve his game in a foreign land.)

A lot of people would think that to be able to play professional football overseas, one would have to be a national player in order to "qualify for that feat".

After all, since goalkeeper Edmund Wee who begun the trend in early 1980s when he signed for Hong Kong powerhouse South China AA in 1981, those who followed his footsteps were all capped players like David Lee, Fandi Ahmad (both joined Indonesian club Niac Mitra in 1982), V Sundramoorthy (FC Basel in 1987)

In the more recent cases of Singaporean players plying the their trade overseas, such as Noh Alam Shah, Muhammad Ridhuan (of ISL club Arema Malang), Persija Jakarta's Precious Emuejeraye, Agu Casmir had more less amassed more than a hundred caps among themselves.

Amid most of these headlines grabbing transfers that saw these capped players earning a bigger wages and adulation awaiting them beyond our shores, one player, however, ventured north to Thailand at a tender age with a pure aim to become a better footballer. 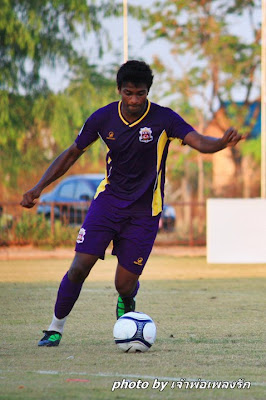 “I always believe that playing with older and much better professional players will improve myself as a better player.” said 24 year-old Sivaneswaran Ramalingam (pictured above), on his pursue to become a better player by heading north to Thailand at the age of 15.

“We were the champions of the U-16 in Singapore but we lost 4-0 to this Thai team (Princess Chulabhorn's Football Academy) coached by Withaya Laohakul.

“Immediately after the game, I told coach Withaya my intention to play under him and he made the necessary arrangements for me to be there.” recalled Siva, as he is normally called, on that faithful day that changed his footballing path after his team, Sembawang Rangers U16 were soundly defeated by the team coached by the former Hertha Berlin player.

Since then, the defender, who first watched the game at Farrer Park where his father played in a social game, stayed on for the next one and half year to train under coach Withaya, until he returned home in 2005 to play for the National Football Academy's (NFA) Under-18 squad.

Instead of turning out for another S.League club following the completion of his mandatory National Service in 2008, Siva decided to head back north to resume his fledging professional career with Thai Airways Ban Bueng FC, a Division One side with the help of his mentor Withaya, who is now the technical director of top Thai Club Chonburi FC.