Stop being a NATO...

By Ko Po Hui June 06, 2011
I must admit something here that it just make me flare up whenever there is always such suggestions from some quarters of the fans pleading the league authority to bring back the likes of Tanjong Pagar United (which happened this year), Sembawang Rangers and Jurong FC back to the S.League.

Not because I don't support the idea of having these "sit-out" clubs back to the foray, nor I'm whole-heartedly for the idea of having foreigner-based sides in our league (unless they have really something positive to contribute).

But what really riled me is the fact that these pleadings were merely pleading with no concrete or tangible effort from whosoever to follow up on these appeals all over the years whenever it's almost due for that"customary musical chair" sequence that took place almost annually in recent years to name "that 12th club" of the league.

Let's not discuss about what went wrong in the perceived "stringent" selection system that interested club must fulfil those criteria before admission to the league, rather one should reflect that if anyone is keen to see their "beloved" club back to the foray?

In my recent #sleague ranting on twitter, I posted a tweet that reads (in screen-grab below from bottom to top order). 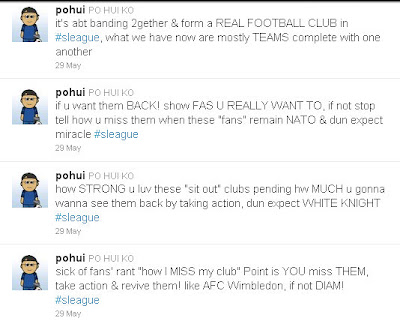 I'm not sure how many of you guys agree with me? although I received a comment from a club official who related to me what difficult it is to source for donations and sponsorship in times like these that his boss was "choked with emotions" when told his staff of the difficulties.

Unfortunately, it is largely maligned that there clubs with perceived "financial backing" are sounded and secured; the sad truth of late (from the grapevine) is how I recalled some "fans" are making unreasonable demands in return for their "support" for the club.

Let us just hope those "fans" are not the FANS we want for the league, who truly want to see the S.League out of doldrums and not later after those rants, I was 'mentioned' alongside with LigaSingapore in two tweets as depicted below.

As the person has 'privated' his tweet and I thought it's best not to reveal his identity.

Apparently, one can tell this person is a Sembawang Rangers supporter and really wants to see the Stallions back to the league that he took the initiative to drop an email to the league authority to "seek some advise".

Although he is uncertain when the recipient would reply or would ever reply, let's feel appreciate that there are some really truly hard-core supporters out there of those "sit-out" clubs.

If whosoever of the "sit-out" club mentioned would like to get it touch with this long-suffering supporters of yours, please kindly drop me an email, thanks ....