A Fitting end to the 23rd Canon Lion City Cup

JUVENTUS FC 0-4 NFA U15
The juniors from the Italian "Grand Ol' Lady" - Juventus were simply outclassed by the NFA U15 in the 3rd/4th placing match of the 23rd Canon Lion City Cup.
Back the partisan crowds at the Jalan Besar Stadium, the Baby Cubs (as I nicknamed them as) wowed their fans with a much calm and composed display as compared to their opener against Newcastle United.

In short, it was an almost flawless display by the Baby Cubs who slammed four goals past their peers just days after they were outwitted by CR Flamengo.

Although, the Italians were unlucky to have a penalty go against them following the sending off of one of their players that allowed the NFA U15 to have full control of the game.

NFA U16 0-0 CR FLAMENGO (Flamengo won on penalties)
Various online feedback suggested that the custodian of the NFA U16, Fashah Rosedin was instrumental in keeping the Little Cubs on par with those impressive Brazilians from CR Flamengo.
Again Hazim Hassan was guilty for squandering a glorious chance at the early start of the first half that would have jab the visitors' heart.

Since that afterwards, it was all the Brazilians led by the impressive Caio Rangel who was responsible to set the pace of their attacks that effectively contained the Little Cubs in their own half.
For second game in a roll, the Little Cubs had to endure the dreadful penalties, but unfortunately, lady luck wasn't on their side as the gallant Flamengo took all the honours.


THE WINNERS - CR FLAMENGO of BRAZIL 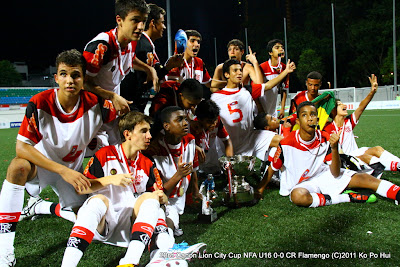 The juniors from the land of Samba truly deserved the accolade for winning the Cup for their flashy display of football that was backed by carnival-inspired local Flamengo supporters and helped the team to the victory although not without having to overcome a stubborn NFA U16 team that also won the heart of the nation again.

"It was disappointing to lost, as it's heartbreaking to lose on penalties, but Flamengo is a good team and I am proud of the team and with each other.

After the game, I told Illyas (Lee, who missed the penalty) that this is part and parcel of the game." NFA U16 captain Dhukhilan on his thoughts of the game.

"It was a difficult game for us as Flamengo is a top team, but we worked hard and keep ourselves in the game and it's a good experience for the team. However, our journey don't end here as it's still a long way to go for us." NFA U16 coach Takuma Koga on his thoughts of the game


"It was a good game of football and we were trying to finish the game within the 90 minutes, but couldn't do so and it shown that Singapore U16 team is developing in a good way and both team were well organized and disciplined in the match, which I think we had at least three to four chances to score.

I would like to thank Singapore for the invitation to this tournament and hope to come back again next year." CR Flamengo coach Celso Martins


It was a good showing by the Cubs, no doubt.

Barring some hiccups along the way, the two NFA squads in the tournament have more or less rekindle those fading faith in local football with their football on the ground.

But after all these boys are still boys, let them enjoy the game as much as they love too.

While at the meantime, it's time to sort out those bugging issues when the Acting Minister for Community Development, Youth and Sports, MG Chan Chun Sing was quizzed by the media about the issue of NS that would affect the development of these players.

Please don't give us any more false hope...


(P.S: Many thanks to the Red Card Group for the invitation to cover this event)
logged down by Ko Po Hui at 01:54:00