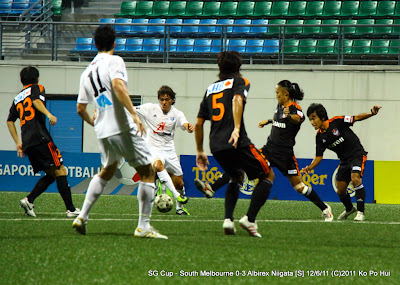 I guess South Melbourne (in white) must be absolutely frustrated by the passing-holding game deployed by Albirex Niigata (Singapore) in their RHB Singapore Cup encounter at the Jalan Besar Stadium.

For a moment, the way the White Swans played was almost identical the way Super Reds made SAFFC looked jaded years ago on the same ground.

It was remarked by Warriors coach Richard Bok then that it was tough game despite the how slow the pace of the game was! 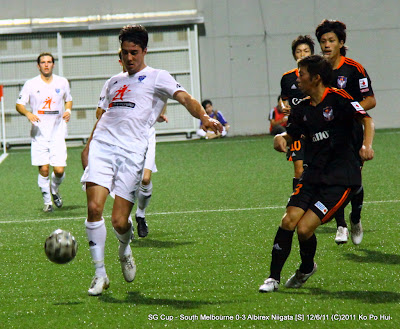 And not surprisingly with the ball almost exclusively belong to the Japanese, it was only a matter of time before they took the lead in the first half through Shotaro Ihata in the 23rd minute.

And it was the way of this strategy that seems to have pushed the Victorians to a dead end with no answer to reply.

Which Albirex's coach Koichi Sugiyama said: "It was because we control the midfield of the game that eventually forced South Melbourne to play long ball."

"But I must say they (South) are physical tough and difficult opponents which I expected them to be." added the Japanese coach. 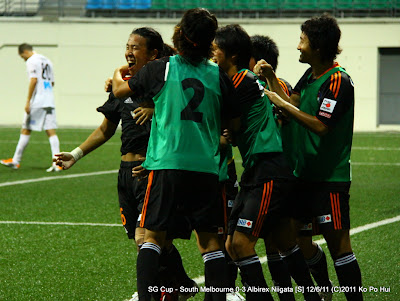 The Jurong East based club notched two more goals in the dying moments of second half from Atsushi Shimono (pictured above with white band on his right wrist) in the 85th minute and skipper Shimpei Sakurada capped his fine performance with the third in 89th minute to seal the game.

"That's probably the difference between being a part-timer side and professional side." said the VPL club coach Eddie Krncevic as he gives his assessment to the team performance.

"I think the weather also plays a part in tonight's game having came from a cooler climate and compared to last time when we played Bangkok Glass which I thought we had a much longer time to acclimatise ourselves then." added the former Anderlecht striker back in the late 1980s.

While the Australian coaching panel also concluded their preparation for this year tournament was disrupted by the absence of their three key players and the congested fixtures back home in Victoria.
PLEASE CLICK HERE TO SEE THE REST OF THE MATCH PICTURES...
logged down by Ko Po Hui at 00:55:00