By Ko Po Hui June 02, 2011
(The content and images of this entry are obtained via former Balestier Khalsa's Head of youth development, Mr Mohamed Zainudeen with the objective of spreading the words about the development of disability football in Singapore) 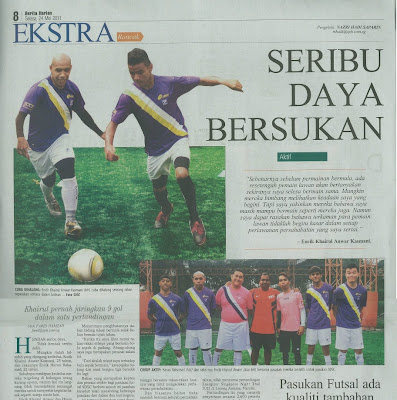 Khairul has scored 9 goals in one tournament

Perhaps that is the philosophy held by both Khairul Anwar Kasmani, 25, and his friend Harun Rahamad, 22 years old.

Even though they belong among the disabled, but that did not break their spirits directly to participate in vigorous activities, such as other young people.

Khairul Anwar and Harun have a problem with cerebral palsy.

Unlike Harun, who experienced such problem since birth, Khairul Anwar also began to experience at the age of one year due to falls from ladders flat corridor.

Despite being disabled, they still participate in sports such as soccer, badminton, bowling and long distance running.

In fact, both of them represent futsal team for the Singapore Disability Sports Council (SDSC).

The team was represented by 10 men who suffer from disabilities of cerebral palsy.

Khairul Anwar, who faced the problem of cerebral palsy in which the right side of his body a little less effort, now works at Changi Airport as a customer service agent.

According to him, his involvement in sports began when he was seven-year-old.

"Back then, I could see many others around my age play soccer on the field. As for my brothers, they are also sport fans.”

"From there my interest in football began,” said the bachelor who is the youngest of three siblings.

As the captain and striker for the team futsal players SDSC, he also added that the team has been playing against local teams and even opponents from other countries.

This includes teams that were also represented by the normal players.

But the most memorable moment for him was when he was crowned as the most valuable player (MVP) in a six-team tournament in Kuala Lumpur last year.

The six teams comprised of players with disabilities.

'It was a memorable achievement in the competition because I scored a total of nine goals.

"And it was in the final stage in which , which I lead the SDSC team' B ' and beat SDSC team' A’ with conceding any goal.

"I was in the scoring sheet with one goal," he added.

PLAYING ON WEEKENDS
Besides representing the SDSC futsal team, he was also involved in the weekend football games with his other friends who also held a friendly match.

Therefore, he has no problem playing the game for 90 minutes.

But was he concerned and worried with the aggression of opposing players?

"Actually, before the game started, some opponents have asked if I was comfortable playing together with them.

"Maybe they're worried of my condition. But I assure them that I was able to play like them, too.

"But I can feel that their aggression was not so harsh in every game of friendship which I have participated in." he said.

Apart from football, Khairul Anwar also plays badminton, bowling and active in the field and track.

Recently, he and two other colleagues, Harun Ahmad and Mubarak, 18 years, has participated in Energizer Singapore Night 2011 at the Lane Trail Hostel, Mandai.

The competition, which attracted 2.600 participants is a long-distance running race held at night.

The three of them finally managed to finish 12-kilometer adventure together in a period of about two hours plus.

During the interview, Harun said that he wasn’t intimidated in participation in vigorous sports and competing with teams that consist of normal athletes.

Harun, who is SDSC futsal team’s goal keeper said that even those who likes to play football, they also suffer from injuries.

"For example, I myself have suffered injuries to both of my ankles at the same time.

"In any event, like the English saying goes, no pain no gain." he said, who is suffering from cerebral palsy which affected the left leg.