By Ko Po Hui June 09, 2011
"Here's the 'Crazy Horse'!!" said former Singapore captain Fandi Ahmad  prior to the kick-off of the veteran match of the 2009 Sultan of Selangor Cup at the Jalan Besar Stadium, as stood beside him (pictured below) was none other than Nasir Jalil (pictured below left in dark-coloured attire) popularly known by that nickname. 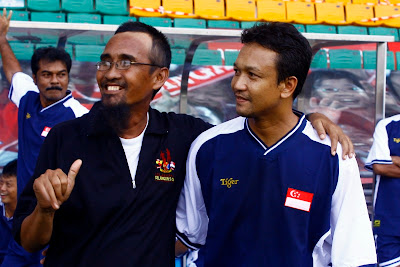 That was the first and last time I saw this great player, who was also known as the "Supersub" in that legendary 1977 team that won the Malaysia Cup under the late "Uncle" Choo Seng Quee.

Known for his boundless energy on the field, it was his equalizer in that epic final that eventually led to Quah Kim Song (pictured below on the left) to score the extra-time winner to beat Penang at the Merdeka Stadium and saw the Republic won the Cup for the first time in 12 years. 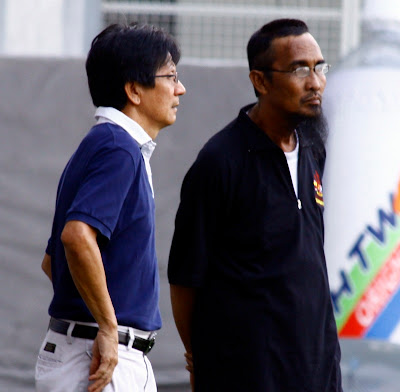 "He was a great individual and a wonderful footballer who earned the nickname ‘Crazy Horse’ for his great passion shown on the football pitch.

"Who can forget the emotional scene in 1977 at the Merdeka Stadium when Robert Sim and Nasir huddled up together at the final whistle of the Malaysia Cup Final where they beat Penang 3-2 to lift the cup." said FAS president Mr Zainudin Nordin in a statement released shortly after his demise on the 8th June afternoon in the northern Malaysian state of Terengganu, where he resided for years.

As for now we bid farewell to another member of that great team that brought glory and joy to the nation to those "swinging" years of the seventies.