By Ko Po Hui April 28, 2011
Prelude...
I'm not being unprofessional for placing this uncompleted team shot of the visiting Hanoi T & T (pictured above) before the start of their AFC Cup match against Tampines Rovers, as their star striker Le Cong Vinh abruptly left the field to have his boots changed before the shot was taken (much to our "disappointment"). 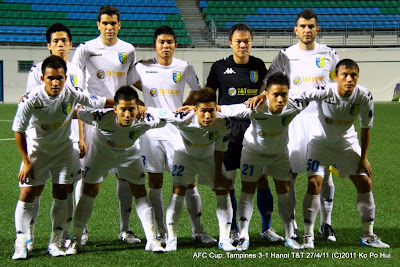 THE OUTCOME
A sweet victory for the hosting Stags, as I'm please again to have the regular guest columnist of this blog, Mr Neo Chee Seong to have his take of the match. Many Thanks to his effort.

"Knowing that a win will put them firmly in the drivers' seat for a ticket into the next round, Tampines Rovers came out to Jalan Besar Stadium, with the mentality to kill the game early.

Ahmad Latiff Khamarudin (pictured below, leaped to celebrate his second goal), the “bad boy” of Singapore Football, puts the stags 2-0 up within 22 minutes with two brilliant efforts from outside the penalty box. The second, which was a thumping shot way out from 30 yards, could be a contender for the AFC goal of the month/week/season award. 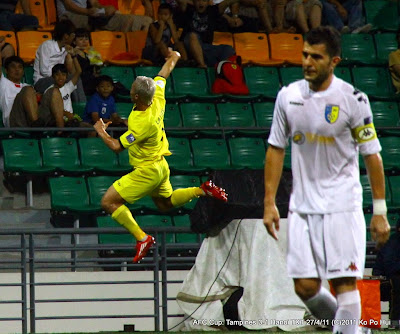 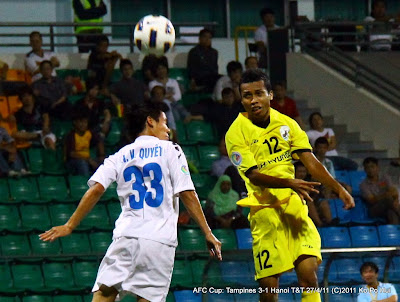 In the second half, the Stags came out the stronger side as Shukor Zailan, Ismadi Mukhtar (pictured above right numbered 12), Akihiro Nakamura, Aleksandar Duric, Imran Sahib and Aliff Shafaein all missed with efforts.

Hanoi piled the pressure on out Stags defence, and got into a lot of good scoring position at times. Unfortunately Le Cong Vinh, Cristiano and Gonzlo all missed their attempts.

Duric, the current S.League top scorer, put the contest beyond Hanoi's reach in the 70th minute with a clever flick off Imran's square ball. 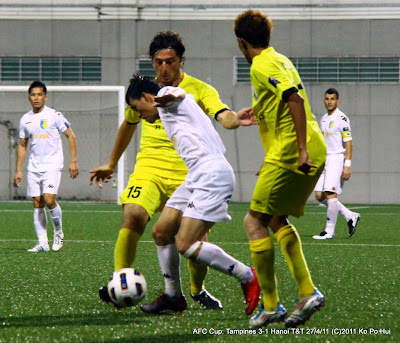 The Stags' defence marshalled by Benoit Croissant (pictured above numbered 15) did exceptionally well with the Hanoi 's bombardment. And the score remained 3-1 in favour of the Stags

A very entertaining game with both sides playing attacking football.

Will there be drama? We'll find out on Matchday 5."
(Views expressed may not be that of the blog owner.)

POST MATCH PRESS CONFERENCE
Both coaches shared their thoughts of the match at the end of the day. 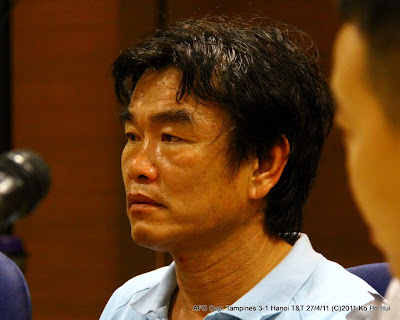 "Basically, there are two reasons for our loss today, first is because of the two early goals we conceded and secondly is because we were playing on an artificial surface, which we are not used to it." said Hanoi T&T coach Phan Thanh Hung (pictured above) on their poor showing.

As coach Phan went on to reveal that due to the lack of artificial pitches in Vietnam, they faced difficulties on having training session during their one-week break prior to this crucial continental tie.

"We have our last match meeting Muanthong Unite of Thailand and if we beat them, maybe we have a chance to make it to the next round." optimised coach Phan when asked about his side's chance of making to the next stage of the competition. 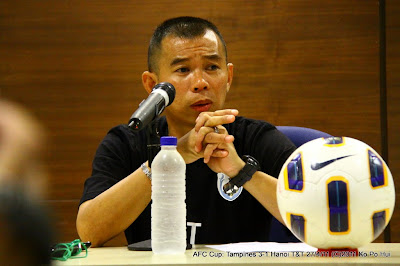 "All I can say is the boys played an almost perfect match that we could have scored more goals, but the win is what we wanted and hopefully we can beat Victory SC (of Maldives) next week to qualify (for the next round). " said Tampines Rovers coach Steven Tan following their gallant performance against the Vietnamese.

Despite scoring the two screamers that laid the foundation of the win, coach Tan felt his star winger Ahmad Latiff could do before that, as it was divulged that the ace striker was playing with stomach upset before having to be replaced by Shukor Zailan in the first half after that feat.

Concurring with his counterpart, coach Tan also agree that Hanoi having difficulties in playing on an artificial surface of that of the JBS's.

"We felt that they are having problem with the field that they are not used to it, and they told me that they only train twice in Hanoi and furthermore the rain tonight had made the surface more greasier for them and many of their (intended) passes gone to other players" added the former national striker nicknamed the "Super Sub" in his heydays.

FOR MORE PICTURES FROM THE MATCH, PLEASE CLICK THE LINK HERE, THANKS