S.League's "Pray for Japan" with Nakata With her group of five of them being first in the queue (pictured above), Japanese expatriate who gave her name as "A I" told this blogger they were here since 5.30am outside the ticketing booth of the Jalan Besar Stadium.

"Because we want to show our support to our fellow countrymen devastated by the recent earthquake back home in Japan." said the bespectacled lady who and her friends decided to make the trip at early hours after they failed to secure tickets at the another sale outlet located at Albirex Niigata (Singapore) office the previous day.

According to an Albirex official, their ticket allocation was sold out in one and half hour time after the sale commenced. 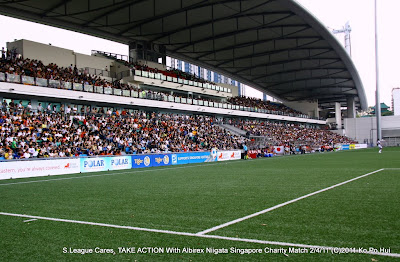 With the pulling power of Japanese football legends such as Hidetoshi Nakata, Masaaki Sawanobori and Masakiyo Maezono is no doubt that charity match like this would be a hot seller.

SELL OUT CROWDS WITNESSED THE BRILLIANCE OF THE LEGEND
And it proved to be the case that all available tickets were snapped up on the day before the match something that had not happened since the YOG matches last year.

Featuring a S.League All-Stars selection of players from various S.League clubs, the hastily-assembled team coached by SAFFC coach Richard Bok with the assistance from Home United's assistant coach S Subramani found themselves down with a goal in the 10th minute by TAKE ACTION With Albirex Niigata Selection's Tatsuro Inui. 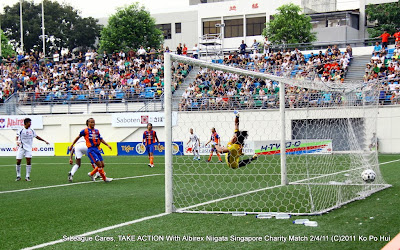 While Gombak's defender Obadin Aikhena's header (pictured above) levelled the scores in the 20th minutes, it was not enough to deny the Japanese from snatching the lead before adjourned for the interval through Bruno Castanheira in the 36th minute.

It was the second half which the sell-out crowds were waiting for as the crowd-puller Hidetoshi Nakata made his appearance after the interval and didn't lost any of his brilliance despite retired from the scene five years ago and scored on the hour mark to make it 5-1 (pictured below) . 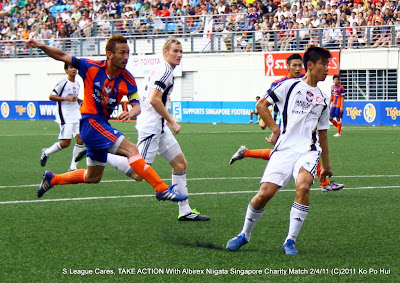 “It was kind of hard for me today since the last time I played was five years ago,” said Nakata after the match.

NOT ABOUT THE RESULT BUT THE ACT OF CONCERN TO THOSE IN NEED
The match eventually ended 7-2 in favour to the Japanese selection side, but what matters is not the scorelines but the appreciation and willingness of coming forward to help. 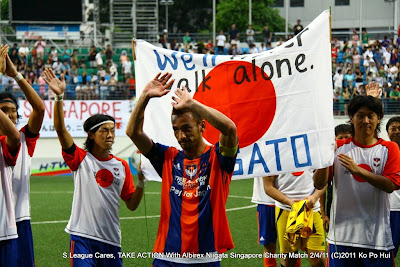 Together with his team mates, Nakata (pictured above, in stripes) shows his appreciation to the crowds after the end of the match.

FOR MORE PICTURES FROM THE MATCH, PLEASE CLICK THE LINKS BELOW:

Email ThisBlogThis!Share to TwitterShare to FacebookShare to Pinterest
Classifed as: events, matchpix, S.League