A friend of my who is actively involved in the local rugby scene dropped me an email to inform me that local rugby community is staging their own charity game in aid for the Japanese quake victims after what the football community had done last weekend.

And since it's all for good cause, here is the information of the upcoming rugby charity match to be played at Padang this coming Saturday... 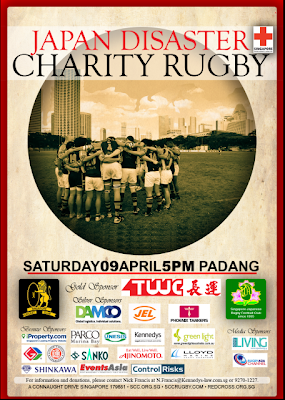 This Saturday 9th April, these two clubs will take the field in a Charity Rugby Match held at the SCC Padang (K.O. 5:00 pm) in front of an estimated crowd of 1,000. Opening remarks will be delivered by Japanese Ambassador to Singapore, Mr. Yoichi Suzuki. Food and Refreshments will be available all afternoon, and access is free to the general public.

The SCC and SJRFC are recreational clubs with a globally diverse player membership of working professionals and students. Both clubs have a rich tradition of playing year round rugby in Singapore and in tournaments held throughout Southeast Asia. SCC Organising Lead Jake Stein offered his thoughts, “This match is a testament to the resilience and fortitude of the Japanese people. Rugby is one of the strongest communities on the planet and hopefully this will be proven again and we can raise a tremendous amount of support for the Japanese Relief Efforts.”

Members from both clubs utilised two fund-raising methods: Individual and Corporate donations. To date, more than S$35,000 has been donated directly to the Singapore Red Cross Society in support of the Japan Disaster 2011 fund.

These donations have been collected from the wider private sector organizations and individuals from all spectrums of the community, and were performed over a three week period, spearheaded by volunteers from both rugby clubs.

To contribute to this cause further, please contact SCC Red Cross Liaison: Nick Francis, N.Francis@kennedys-law.com.sg
logged down by Ko Po Hui at 23:14:00