(This entry is formulated with additional details provided by the media release issued by The Red Card, the co-organizers of the 23rd Canon Lion City Cup) 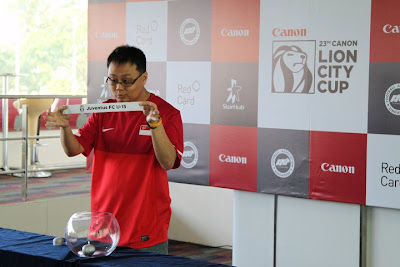 (Pictured above) I drawn "Juventus" to join Group A (picture credit: The Red Card)
... that the National U-15 team due to play in the upcoming 23rd Canon Lion City Cup had found themselves grouped together with Italian powerhouses Juventus U-15 and Newcastle United's U-15 squad in the Group A.

While in the Group B, the other Singapore representative side – the National U-16 (comprised on the last year's YOG team ) will be facing the challenge from U-15 squads of renowned Brazilian side Flamengo and another English Premier League side, Everton. 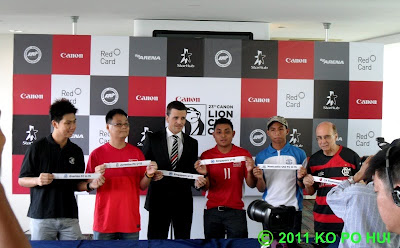 (Pictured above L-R) Terence Ong represented Newcastle's Fan Club, myself, Mr De Felip, Arief of LATW, Ismail Kay of Everton's supporters club, Francisco Zoroastro Campos of Flamengo's supporters club (picture credit: Mt Yip Siu Ming)
I was given the honour to decide the fate of the U-15 team when I got an invitation to be part of the draw panelists alongside with representatives represented the local fans' club of Newscastle United, Everton and Flamengo, while the “Grand Old Lady” of the Italian football was represented by Mr Andrea De Felip (pictured above third from left), the First Secretary and Deputy Head of Mission from the Italian Embassy.

One surprise was the omission of the Portuguese club Benfica, whose place was taken up by Newcastle instead.

“It was understood that the Portuguese government had rescheduled the schools' examination period that prevented the participation of Benfica, however, we see Newcastle United as a good addition to the tournament.”said R Sasikumar, the Managing Director for The Red Card, the co-organizers of the tournament.

TOURNAMENT FORMAT
At the start of the tournament, these six teams will play in a single round robin format on the 18th, 20th and 22nd of June. The top two teams from each group will progress to the knock out stages on 24th June where these four teams will vie for a places in the finals on the 26th June. 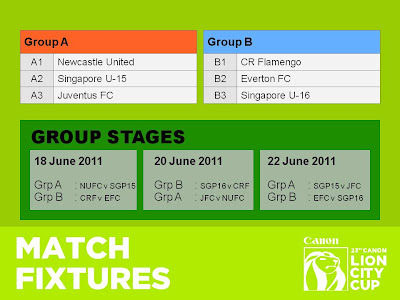 Fans can expect to see Newcastle United play against the U-15 team in the first match of the tournament on 18 June 2011. YOG Bronze medallists, the U-16 team will have their work cut out for them as they face Brazilian samba boys CR Flamengo on the 20 June 2011.

In addition to playing in front of Singapore fans, the Cubs will have an added incentive to do well in the tournament all thanks to title sponsor Canon Singapore with the imaging giants promised to pledge $1,000 for every goal scored by the Cubs during the tournament.

The donated funds will go towards the development of the two featured Singapore teams.

TICKETING INFORMATION
The tickets to the matches will go on sale starting from 1st May from all AXS machines island-wide as well as at all Ticketbooth outlets.

Interested fans can choose from a selection of ticket packages which includes
The ticket prices range from $20-25 for the Open category, and $7 for students and senior citizens. 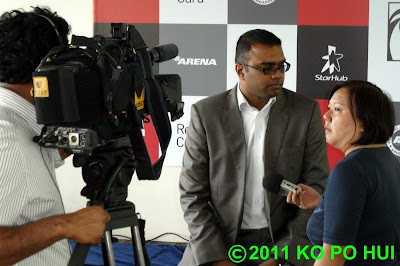 Explaining the ticketing policy of the tournament, Sasikumar (pictured middle above, as he prepared for a TV interview) said:"We have chosen to keep our ticket prices affordable for the whole family. With the purchase of any ticket, supporters are entitled to enjoy two matches that will be played at 6pm and 8.45pm respectively at the Jalan Besar Stadium.

"We are also taking steps to ensure that the event will be an unforgettable and exciting event for everyone." added the former national team defender.