I was trying to dig out from the archive of the past regarding the shocking announcement of the disband of the national football team announced by the FAS president, Mayor Zainudin Nordin that mentioned only "4 or 5" players from the disband list will be retained.

But having sourced around the cyberspace and filtered, redefined the searching keywords I can only retrieved a blog entry by elusive "happy" (as I still don't know the identity of this blogger) that mentioned what I was looking for. 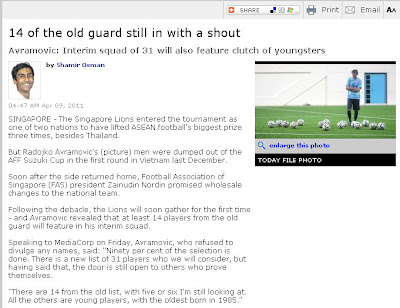 And Saturday's TODAY (pictured above) had reported that "least 14 players from the old guard will feature in his (Coach Raddy) interim squad" of 31.

Selection of players remains the prerogative of the coach all the while (undoubtedly), but the Mayor did mentioned in public months ago that only "4 or 5" players will be retained, so what kind of message are we, the fans, getting at our end?

Such "flip-floppiness" between both messages that the FAS president and the national coach had conveyed months apart had left the masses in a state of confusion of what's really going on.

(Pictured above) A call-up to the Geylang Field training base should be seen as sacred ordeal for the Lions
First and foremost, I must state it very clear that I have nothing against those "retained players", but with such "flip-floppiness" shown by naming at least 14 of them into the interim squad of 31 had raised some doubts on how sincere is the local game authority's willingness to revamp the Lions' setup by the fans.
Hopefully, in coach Raddy's words "the door is still open to others who prove themselves." and we really hope those had proven themselves so far will be called up (and we know WHO they are), while at the meantime for those "going to be retained" - please prove your worth and the faith on you guys shown by the coach (please don't let him down).
logged down by Ko Po Hui at 04:09:00