SINGAPORE, 9 February 2010 – Of the top four S.League clubs to receive a bye to the quarter-finals, Home United, Gombak United and Tampines Rovers find themselves facing with a challenging League Cup journey after they were drawn in the same half of the competition’s quarter-finals.

Home United have been drawn against 2008 League Cup winners Gombak United in their quarter-final match-up, with the winner of the Tampines Rovers – Woodlands Wellington / Albirex Niigata clash awaiting in the semi-finals.

In contrast, 2009 League Cup runners-up SAFFC should be relatively pleased with the draw having been drawn at home against either Beijing Guoan Talent or Sengkang Punggol in the quarter-finals.

All eyes were on S.League new boys Etoile FC and Beijing Guoan Talent, who have been drawn to face Balestier Khalsa and Sengkang Punggol respectively in the preliminary round.

The other two preliminary round matches will see Woodlands Wellington host Albirex Niigata, with the Young Lions travelling to Bedok Stadium to play the 2009 RHB Singapore Cup winners Geylang United. 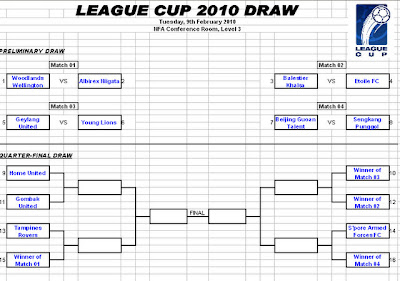 “From what we’ve seen of the two new teams, they have the potential to finish in the top four in the league,” he said.

Mr Zainudin Nordin, FAS President, Mayor for Central Singapore District and Guest-of-Honour at the draw, is one of many who are looking forward to witness yet another exciting League Cup tournament.

“There has been a lot of romance associated with past League Cup competitions, with clubs like Woodlands Wellington, Gombak United and Brunei DPMM lifting the League Cup trophy as their very first piece of silverware, and I think we can expect surprises again this year.

“This season’s S.League has been full of thrills and excitement so far, and it will be interesting to see who will lift the first major trophy in 2010.”