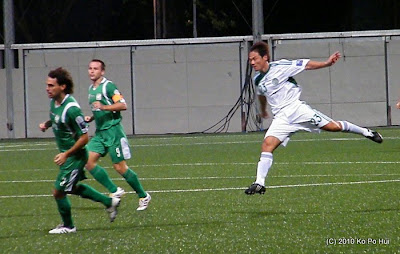 (Pictured above) This attempt by Tai Po's Ye Jia (23) was the first "decent" shot of the game I took.

SHORT SCRIBE
To be honest, it was a poor first half for me as there were barely any worthy shot that deemed "photogenic"

Time to time, I could only recall myself deleted those "unworthy" shots - in short, it was a frustration first 45minutes. 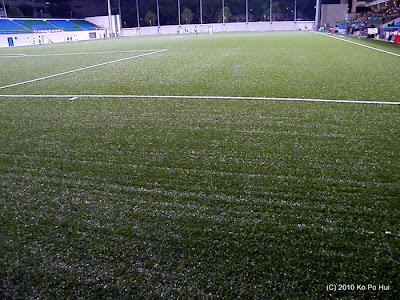 Things were made even more challenging, when I was told to stay near to the corner area (pictured above), instead of roaming behind the goal within the limits set by the billboards, which were not existed during the game! 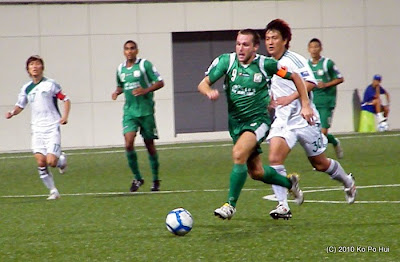 (Pictured above) Geylang's skipper Miroslav Latiak had a good game as he practically involved most of the Eagles' offences. 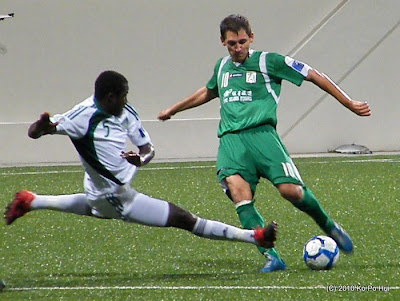 (Pictured above) Geylang's striker Peter Tomko (right) had a fairly quiet game.
Things improved in the second half when Geylang were attacking towards the goal, which I still positioned behind, as they shown more innovative style of attacking plays as compared to their guests from Hong Kong. 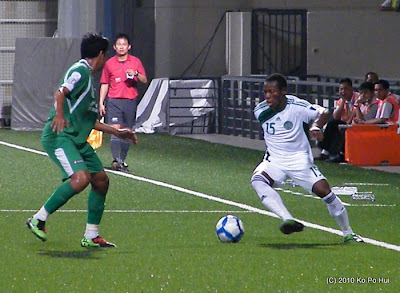 The lack of innovative play in Tai Po had let Christian Annan (pictured right, above) down
Yet, against the run of play Tai Po took the lead in the 70th minute through Ghanian winger Christian Annan, who may have caused considerably threat to Geylang's defence which Tai Po attacking build-up failed to allow him to shine for large part of the game. 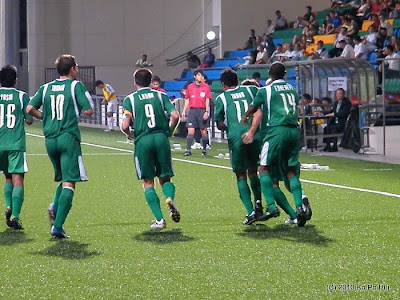 (Picture above) The Eagles celebrated after Belicak's equalizer.


However, much to the disappointment of the small band of Tai Po supporters, who travelled with their heroes, that an unmarked Rastislav Belicak sneaked in from nowhere to snatch the equalizer from close range, off a corner in the 75th minute. 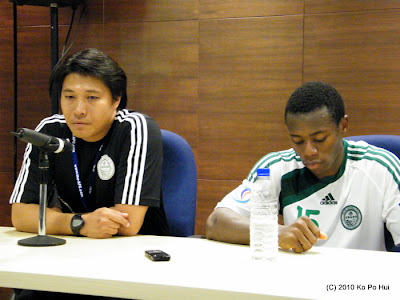 Tai Po's coach Andy Cheung (pictured left above with Christian Annan) acknowledged that it was a tough game, but he glad he achieved what he set out in the first place – to secure a draw from this game, while added that his team were not used to the artificial turf of Jalan Besar Stadium (like most foreign teams would share the same sentiment)

“As this is first game (of the AFC Cup), we can't just blindly go for an 'all-out attack' as we don't know how they (Tai Po) play and we decided to play it tight.” replied Geylang's coach Mike Wong (pictured above with skipper Latiak) when queried if his team were playing too cautious in their first game back in continental football after six years of hiatus.

“I felt we gave away the ball in our defensive third and the lack of communication among the players that led to their first goal (in the 70th minute)” commented Coach Wong on his thoughts of the goal conceded by his team.

With two away game scheduled in their next continental adventure, the Eagles' chief revealed that “there'll be not changes in their approach” in those match on the road.