"This is OUR OWN League!" 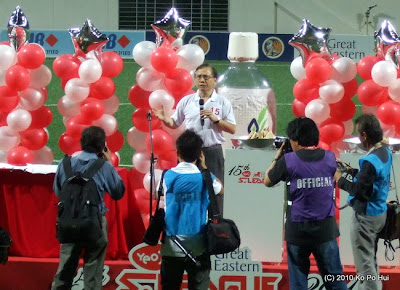 Associate Professor Ho Peng Kee (on the rostrum) gave a rousing opening speech to those at Jalan Besar Stadium by urging more support to the local league.
"This is OUR OWN league!" rallied the Minister of State for Home Affairs and FAS advisor.

"I said it this LOUD because I not only want to make myself heard at Jalan Besar, but the whole Singapore as well!

"Bring your family and friends to the stadium, with their support at the stadiums the players will be encouraged and put up display of better football." said the former FAS president.

With that he declared the start of season 2010 at the home of Singapore football. 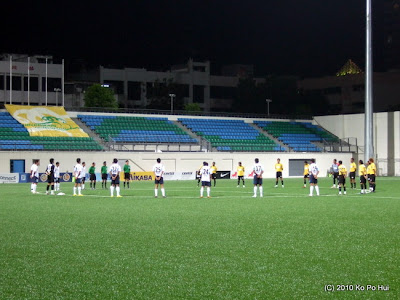 A minute of silence as a mark of respect to the late Mr Tan Eng Yoon, a former FAS Secretary-General who was killed in a road accident on last Sunday. 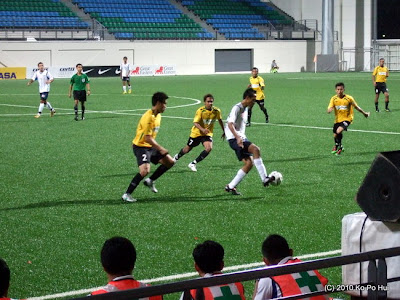 Woodlands started off brightly with an early goal from journeyman Winston Yap in the seventh minute, before Moroccan striker Abdelhadi Laakkad doubled the scores on the 21st minute by coolly finished off a well-worked out move from the flank.

It looked as though the Rams had secured all three points in the bag, before the signs of fatigue begun to show on them into last quarter of the game when the hosts decided to make some changes in the later stages that saw them levelled at the end of the day. 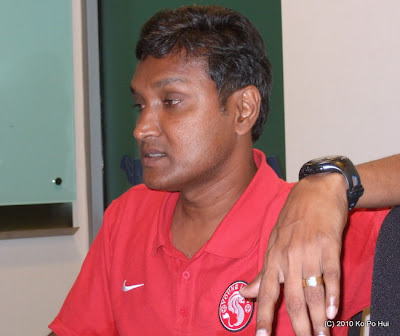 "It was an entertaining game and Woodlands is a decent team." said Young Lions coach V Sundramoorthy (pictured above) who also paid tribute to his former club.

"But being our first game of the season, some of the new players need time to settle in. And I'm glad that it was not a losing start and having come back from two goals down (to level the scores), it gives the team the confidence in our next game against Home United." added the "Dazzler". 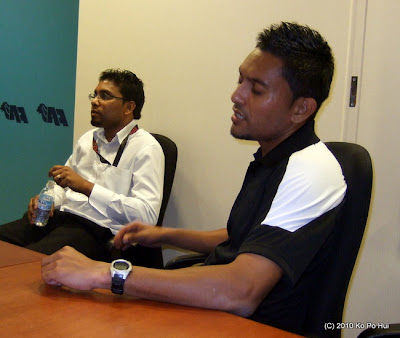 "It was disappointing, as two points were lost." said a visibly disappointed Woodlands coach A Shasi Kumar (pictured above right with club manager Jeykanth Jeyapal at the background).

Although, the former Gombak United assistant coach stop-short to comment if the lack of match fitness was the cause of the disappointment, as he felt it was too early to assess right after the match.

However, it was mentioned at the end of the day that a few friendlies will be scheduled for the Rams who felt that such matches are adequate for their preparation before their next game against new boys - Beijing Guoan on the 18th February.
logged down by Ko Po Hui at 23:03:00