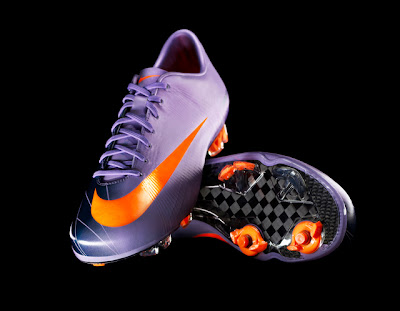 With the the vibrant ultra-violet outlook, it is hard not to notice the presence of "Mercurial Vapor SuperFly II" on the field.
Revolutionary football boot features Nike adaptive traction technology and helps players improve their performance with expert tips and training through Nike Football+

“NIKE, Inc. is the world’s largest and most innovative football company,” said Mark Parker, NIKE, Inc.’s President & CEO. “Our success in the world’s most popular sport is based on creating innovative products and experiences such as the new, incredibly light and responsive Mercurial SuperFly II boot and Nike Football+ which connects the digital and physical worlds of football. These are among Nike’s most advanced products to date and will help write the next chapter for Nike football.”

Traction on demand
In developing NIKE SENSE adaptive traction technology, designers created an adaptive stud that can extend and retract by up to 3mm, based on ground conditions and pressure exerted by the player. Directionally positioned blades maximize cutting and allow for quick changes of direction, while secondary toe traction provides added toe-off power for those first critical steps. The result is a boot that enables greater speed in all directions.

Nike’s design and engineering teams talked with some of the fastest players in the world, who emphasized that acceleration around a defender is just as important as beating him in a straight line. The Nike Sports Research Lab researched the world championship finals in 2006 and found that there were 845 slipping events over 63 games, or roughly 14 per game. Building on these insights, the Nike team collaborated closely with elite athletes including Cristiano Ronaldo, Zlatan Ibrahimovic and Alexandre Pato to create a boot that enables toe-off acceleration and minimizes slippage in game-changing situations. 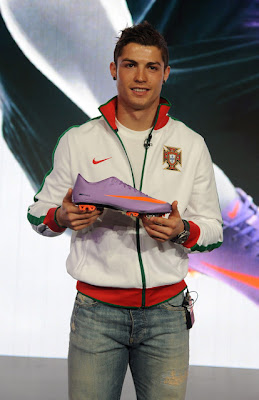 Athlete insights also pointed to the desire for a close fit around the foot without compromising on durability or support. Next-generation Nike Flywire technology incorporated into the boot’s streamlined upper provides a lightweight, strong and more dynamic fit. The carbon composite tuned chassis provides a lightweight platform with traction elements and allows players to stay closer to the ground.

The Nike team collaborated closely with elite athletes including Cristiano Ronaldo, Zlatan Ibrahimovic and Alexandre Pato to create a boot that enables toe-off acceleration and minimizes slippage in game-changing situations.

The Nike Football + Master Speed program provides exclusive access to Brazil national team stars Robinho, Fabiano and Nilmar, putting the power of speed directly into footballers’ hands and their game daypreparation. Four camps are available:
Building on the Master Speed program, “Inside the Elite” is a new feature offering exclusive inside access to players. Athletes including Robinho, Javier Mascherano and Zlatan Ibrahimovic offer candid insights on their game and match preparation. 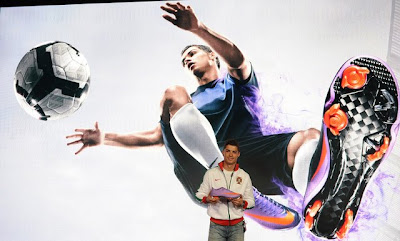 Ronaldo standing in front of the gigantic poster featuring him in action with "Mercurial Vapor SuperFly II" at the product launch in London.
In addition to these Nike Football+ Master Speed programs, footballers will have access to country-specific Nike Football+ activities like training sessions, trial events and player appearances. Nike Football+ is also available as an app for the iPhone and iPod Touch on iTunes®.

The Mercurial Vapor SuperFly II boot is available at retail globally and at www.nikestore.com from April 1st 2010. Here in Singapore, the boot will retail at $629. Nike Football+ can be accessed at www.nikesoccer.com.