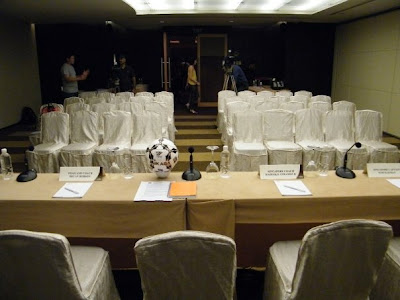 The setting for the media conference.
I was at the pre-match media conference, held at the Amara Hotel at Tanjong Pagar, of the utmost important Asian Cup Qualifier between Singapore and Thailand. 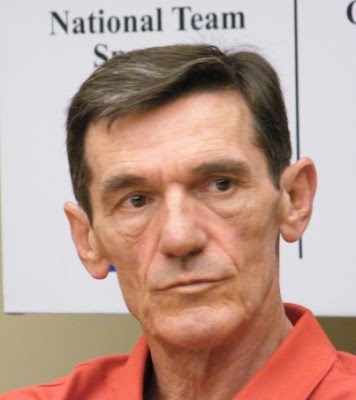 Singapore coach Raddy (pictured above) said he's glad with the media turn out today that he felt this must be something good about the game tomorrow.

Thailand's coach Bryan Robson (below) this is first time he comes to Singapore in a capacity as a coach and he's looking forward to the game and challenge ahead. 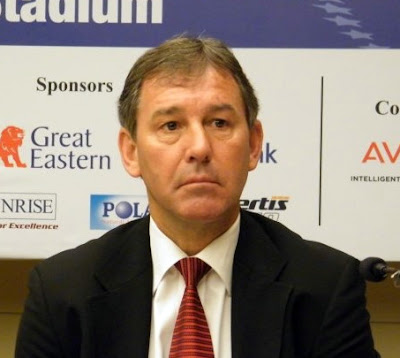 At the meantime, the former England skipper gave an update to the media on his team preparation and said,"everything is going well.", but he highlighted a problem many national teams' coaches are facing - the lack of time to prepare the team when some of the overseas-based players "can't stay long enough".

Coach Raddy thinks that's not better occasion than Singapore versus Thailand to have the local fans come out in force to give the team the "home advantage" they need.

The Serbian coach told the media that team preparation is good and he's happy with the players' attitude shown in the training, with everyone eager to prove themselves. 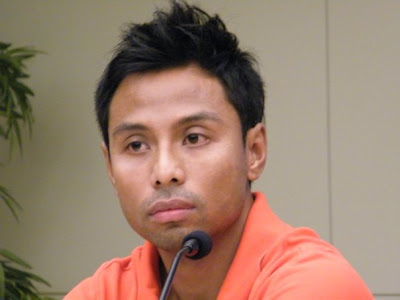 Lions' skipper Noh Rahman (above) echoed his coach's point of view and he's grateful the chance to lead the team out tomorrow, but he still felt that the captain is striker Indra Sahdan Daud, while added each of the eleven players on field has the capability of being the team's captain. 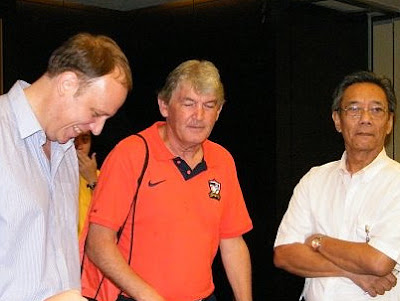 Coach Robson appreciate the valuable help given by his assistant Steve Darby (pictured aboved, middle of the trio), for being someone who has been working in the region for so long, whose knowledge of Singapore players helped him in preparing for the tomorrow's game. 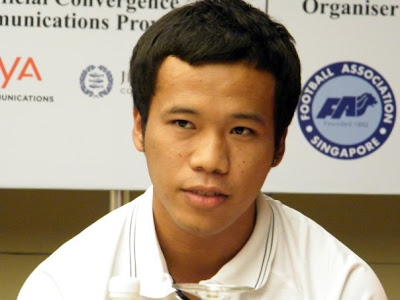 Thailand's captain Datsakorn Thonglao (above) said that 2007 controversial AFF championship final between the two sides was a thing of a past, as his teammates and himself are focusing on tomorrow's match instead.

He said every player in the Thai national team is skillful and everyone having the capability to win the game on his own. 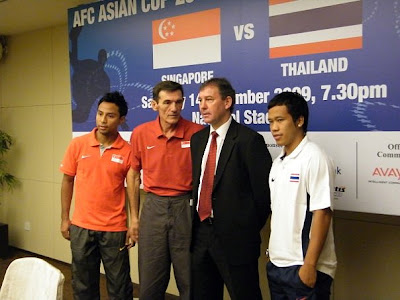 Friendly pose before the big match tomorrow... (wonder what Coach Raddy was saying to Robbo?) 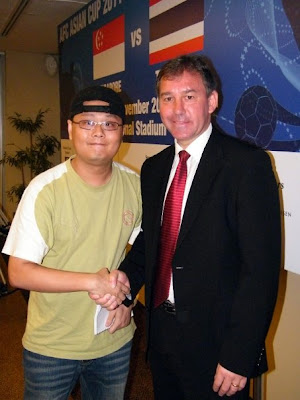 SNEAK PEEK AT THE TRAINING SESSIONS 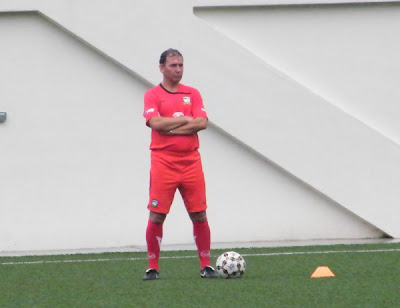 Coach "Robbo" ditched aside his business suit and got down to business at the Jalan Besar Stadium. 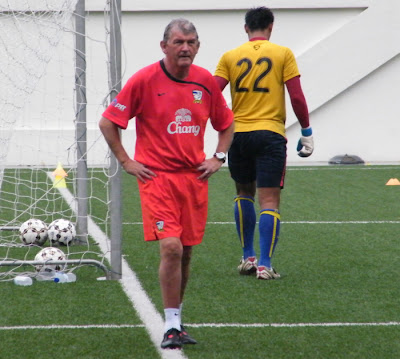 With former Home United coach Steve Darby as his chief assistant, coach "Robbo" hopes his familiarity of the Singapore players would help him. 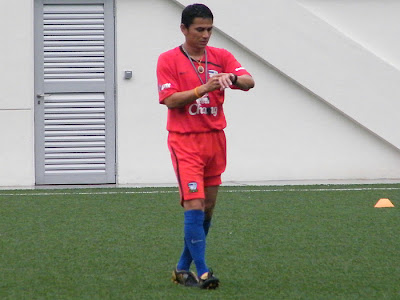 Not forgetting to mention this legend who used to struck fear to Singapore's defence - Kiatisuk "Zico" Senamuang (above), now back as another assistant to Bryan Robson. 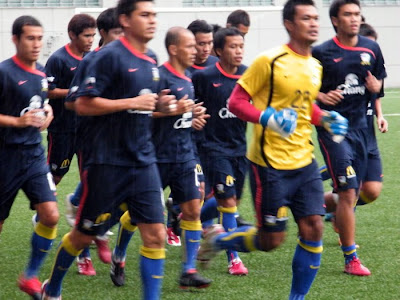 The Thais started their session with slow jog around the field. 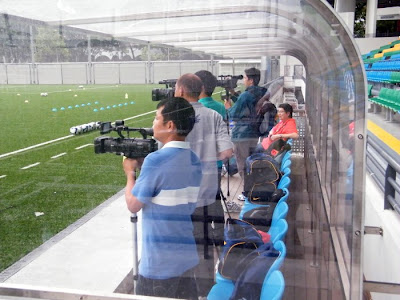 The Thai media at work... 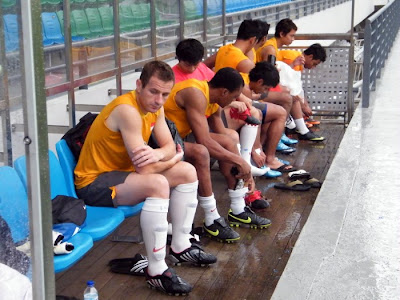 Some of the Lions getting ready for the work-out. 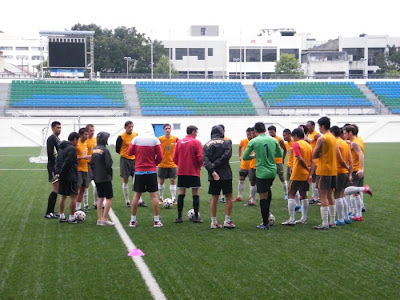 Not before coach Raddy delivered his briefing to the boys first. 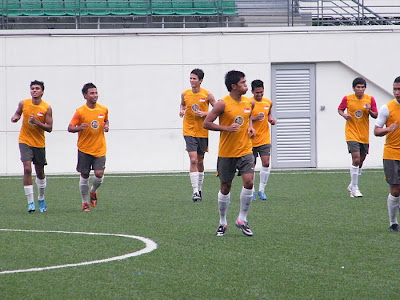 All I can say the Lions are in good spirit.. Good Luck and "Untuk Bangsa Dan Negara!!"

SINGAPORE, 13 November 2009: FAS have been working closely with the relevant authorities on the safety and security arrangements for the AFC Asian Cup Qualifier between Singapore and Thailand at the National Stadium on Saturday 14 November.

Measures include among others reducing the capacity at the stadium to 40,000, designating seats within the stadium for the Thailand supporters, urging the public to purchase their tickets early and to take public transport to the match.

Please note that Car Park F and the coach bay area next to Car Park G will not be available for the public on the day.

Tickets on match day will go on sale from 5.30pm at the National Stadium East and West Entrances subject to availability.

We are pleased to inform that SBS Transit will be increasing the frequency of Service 11 from 4.30pm to 11.00pm for the convenience of fans taking public transport. Service 11 plies the route between the Geylang Bus Interchange (next to Kallang MRT Station) and the National Stadium.
logged down by Ko Po Hui at 12:54:00