Jeremy Christie (R) shields Joan Capdevila of Spain from the ball during the 2009 FIFA Confederations Cup match between New Zealand and Spain (Photo by Jasper Juinen/Getty Images Europe)
I had a chance to chat with New Zealand international midfielder Jeremy Christie, who was in town recently for a trial selection session organized by the Football Association of Singapore (FAS) for the upcoming season, which is scheduled to kick-off next February.

Jeremy was brought to our shores by Trebol Sports International, a local scouting and soccer talent management company, set up by ardent S-league fans.

The New Zealand footballer is one of many top calibre players that Trebol Sports will like to bring to Singapore and other Asian leagues.

"I used to play for Perth Glory before I decided to return to New Zealand to play for Wellington Phoenix” said the 26 year-old Kiwi who joined the New Zealand-based A-League franchise while still having a year left in his contract with the Western Australian outfit in 2007.

"While I had a great first season when I had been playing regularly, but it wasn't the case in the following season even though I thought I was doing great.

"And it got frustrated at times, as what I told my coach Ricky Herbert (who is also the concurrent New Zealand national team coach), that I decided to leave Phoenix when my contract expired in June.” as he reasoned that being benched for lengthy period would do no good to his game.

Since leaving much glamorous Australian league, Jeremy returned to Waitakere United for his second spell with the New Zealand Football Championship (NZFC) club, having first started for them in 2004.

Despite his relatively young age, the holding midfielder actually begun his professional career in England with Barnsley in 1999.

"I was only 16 years of age when I joined Barnsley on YTS (Youth Training Scheme)scheme.” as he revealed how he moved to the once-Premiership club.

"Having played for my country in the U-17 World Cup then, I eventually caught the attention of one of their coaches who brought me to the club with three other fellow Kiwi players.”he added.

"Barnsley is a small mining town," as Jeremy continued to share with us his early days in England over a casual meal at Newton Circle Hawker Center.

"As I was there with some of my fellow countrymen. Furthermore, having staying in a boarding school away from home since I was 14, I did not have any difficulty in adapting in a new environment.

"In the end, I got to play in a couple of first team games and it was a great experience." as he looked back those days in the English league.

Youtube clip on Jeremy (watch it before it's gone!)
Nonetheless, for the present moment there are two things that topped his priority.

"My club, Waitakere United, is still in running for the Oceanian Champions League, if we do well and win the tournament, we'll be on our way to the World Club championship!

"But nothing beats the prospect of being able to play in the World Cup next, and the New Zealand team are just a victory away (against Bahrain on 14th November)."

"Imagine the last time when New Zealand played in the World Cup, I wasn't even born yet!" he exclaimed.

He reckons that the impending success of the All White and the continuing participation of the Wellington Phoenix in the A-League will help to lift up the profile of football in the rugby-mad nation.

“In fact, football has a higher participation rate among the youth in New Zealand than rugby! However, as some of them grew up they chose rugby because it's a 'cool' sport.” revealed the player whose grandfather was born in England, which tells us why he took up the game and joked he do not have the physical built for the 15-men game. 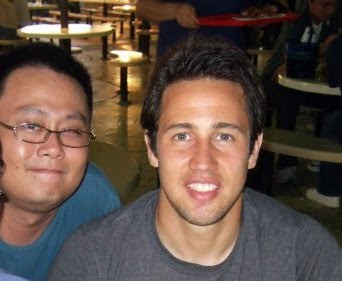 The blogger (left) with Jeremy Christie (right), had this snapped at Newton Circle Hawker Center.
Coming towards the end of the dining session, Jeremy hopes he could play in the S.League.

“Having played in countries like England, Australia, I love to play in Singapore some day, as it's a nice place and with the S.League being one of the top 10 leagues in Asia." he concluded.

We definitely hope he will and if New Zealand does make it to the World Cup next year, how is the impact of having a player in Jeremy's calibre earning wages in our league?

(P.S: Many thanks to Trebol Sports International for making this feature write-up possible.)