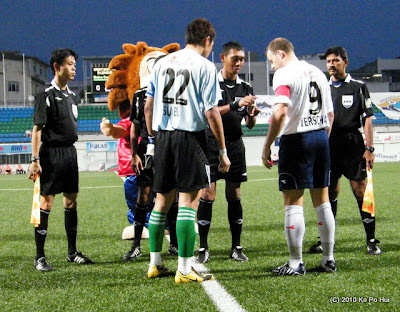 Referee Abdul Malik officiated this historical match
INTRODUCTION
It was a historical day at the Jalan Besar Stadium, as the season 2010 welcome the both Etoile FC and Beijing Guoan into the foray of the S.League.

For the record, the French-based Etoile is the first European-based club, while the feeder club from the Chinese capital is the fourth Chinese-based club to be feature in our league.

SHORT SCRIBE
I was at the pitchside to snap some shots during the first half, before heading to an elevated angle to catch this "live" game of the season after the break.

In the first half, what I saw was a stout Beijing defence that did a job in holding the French side at the bay, as in what their coach said the post-match press conference "they played according to my instruction", with Etoile striker Frederic Mendy was certainly a lone figure upfront with unwanted attention from those green-shirted men. 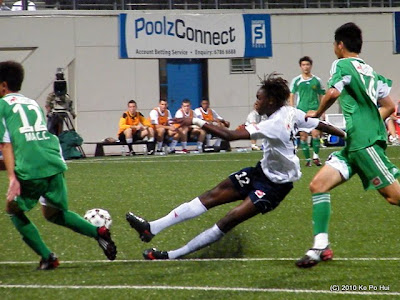 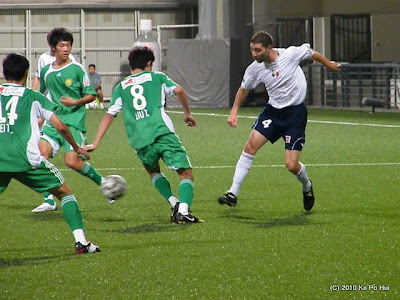 It was common to see situation like this that whenever Etoile on the ball, they were being "closed-up" like what happened to Khaled Kharroubi (no.4).
The play of the game did not alter much when the match resumed in the second half, as I got a clearer picture to see how the weak the Chinese frontline was up against the French. 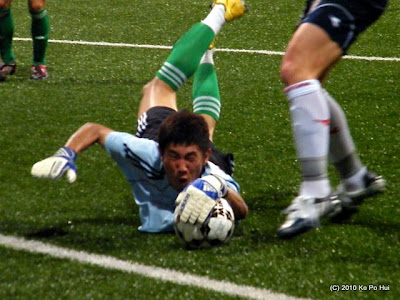 Brave effort by Beijing's skipper-cum- custodian Su Boyang, (as pictured above as he saved the ball off the feet of his counterpart Matthias Verschave in the first half), but his slip in the second proved costly.

And at the end of the night, a slip by the Beijing's 'keeper Su Boyang allowed Flavien Michelini to stab home the winner with five minutes (plus stoppages)to go. 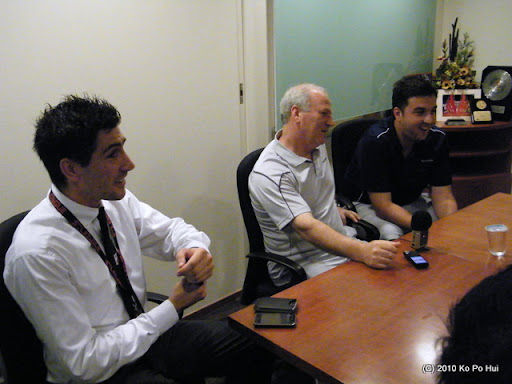 Despite the win over their fellow debutant, Etoile coach Patrick Vallee felt the team, being together for just two weeks, still have a lot to work out to tighten up those loose-end.

While CEO Johan Gouttefangeas is confident of a healthy turnout when they play their first home game at Queenstown Stadium, as he has been receiving number of enquires over the phone from the 7,000 strong French expatriate community. 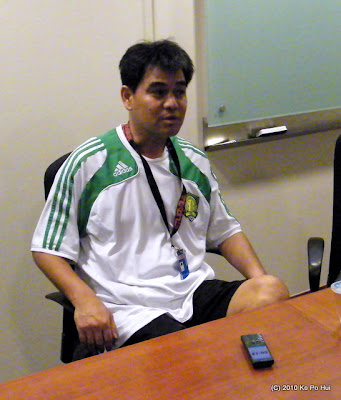 (P.S: This assurance was made after a question was asked if Beijing would delivered what it promised, after its predecessor Dalian Shide promised BUT FAILED to deliver a big-named player from their CSL team during their time in the league.)