Dashed off to Bishan just now...

Got a SMS from a friend just now, close to 4pm

M- "I be expecting a fren.. But will try to catch if I can make it.. Kick-off 5pm?" (as it's still festive mood with visiting taking places all over)

M- "Not likely to join as my fren is still ard.. Any update ?" (as my friend was still at my place when I texted my source at Bishan in middle of the game)

M- "Plan aborted.. I comin.. Is the game play over 2 halves of 45mins or 3 periods of 30mins?" (Decided to catch a bit what had to offer since the Home United's national players were back )

F- "45mins" (At least, not as weird as last time I saw HU played against Super Reds) 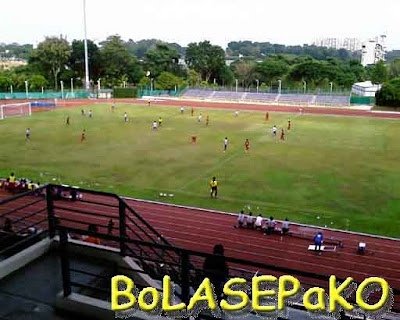 I guess another reason why the friendly matches were staged at 5pm instead of following the 7.45pm is probably because the renting club would not want to incur any extra electricity bills for switching on the floodlights? (Alrite Paul, as mentioned I had put down here :P)

Ok ok.. just joking.. think on the positive side, having 5pm matches is not a bad idea (in fact in the old Premier League days, some matches were played in the afternoon!), after all, it does allows fans and working media more flexibility though HEAT is one detering factor.

(Many thanks to Mr Ong JY for the tip-off of this friendly and Mr Paul Green for the concept of conceiving of this entry..)