Save your breathe, Mediacorp 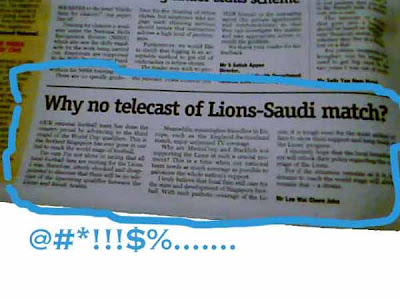 You need not go into length on what you are going to explain about the no-show of the Lions-Saudi match, because we read your mind!

Not surprise of you saying like this "we don't have the RIGHT to telecast"
Save the crap… ever since the demise of “Sportcity” (prior that the Channel 12, which was the de-facto sport channel), terrestrial broadcasters in Singapore seems to be “ill-treated” those sports lovers, whom aren’t cable channel subscriber.

As we all aware that MOST of the major sporting events are shown on cable channels. Fair enough as the higher bidder won the telecast right to show on their network, so which why I would like to ask why is the terrestrial broadcaster been losing out every time when bidding for right to telecast any major sporting event?

We already lost the “World Cup” for years and even the “Asean Football Championship” to the cable operators, so much so when the national team has made it so far to this stage in the World Cup qualifiers, yet fans (even small in numbers as compare to this “Anglophile”) were snubbed from watching the match.

As like what I quoted a working friend of me,

“(We have) invested so much on foreign talents, yet (we) want a live event (telecast) for the whole nation (a chance to watch and support the team), yet cant’ give”
So one last question - Did you guys spent the TV licence fees wisely?? Ask around are the viewers pleased with your selection of holiday programs??
logged down by Ko Po Hui at 22:24:00