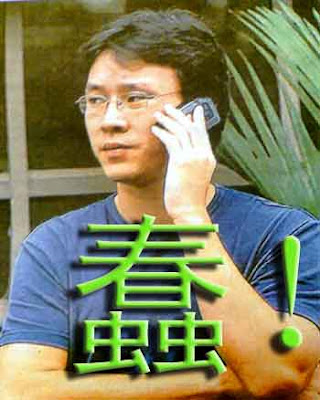 不是跟你说了吗?
Told you so, didn't I?

都叫你别干"那回事"了
Told you don't get involved with "that thing"

现在好啦!"一失足千古恨"
There you have it! "One wrong move and regret forever"

Some of you are puzzled who is the bespectacled guy talking over the phone?

His name is Zhao Zhipeng (赵志鹏), one of the Liaoning's seven being charged for "that thing".

As he's getting married soon, which was why He was the first to plead guilty to admit to have been involved in "that thing".

There you have a it - going to get married soon and caught with your pockets stuffed with ill-gotten cash.... so calling him "BODOH", sounded harsh??