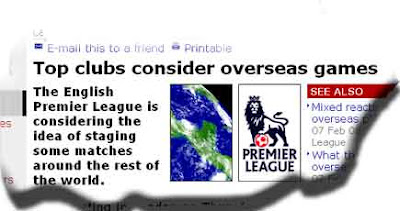 I'm not a xenophobic (if not, I would have be the flag bearer of asking the "strictly-local-born" policy in the national team.) but the latest gimmick by the folks in London is way TOO MUCH!!
At least, should we say their conscience are CLEARER now as they finally realized after so many years of "holiday" football in this part of the world, the aristocrats really realized they need to be a bit more serious this time round.
But "Anglophiles", you would just have to "wait long long" as we will not have the mean to stage any of the matches unless the new Sports Hub is ready by 2010...
While at the meantime, I shake my head and declared, "FOOTBALL HAD LOST ITS GRASSROOTS LINK - FINALLY!!"