No one would expect this to happen so sudden!

Shocked, stunned and my jaws almost dislocated upon receiving this shattering news that "Ah Long" Noh Alam Shah could make a sensation return to his former club, Tampines Rovers (as depicted).

If this is to turn into reality, it would set to jolt the S.League, which is desperate in need of a shot in arm to boast its already fading fortunes.


Known for his fiery temperament on the field, the return of Alam Shah could be one of those catalysts to spur the passion that has seldom be seen at the "grounds downstairs". 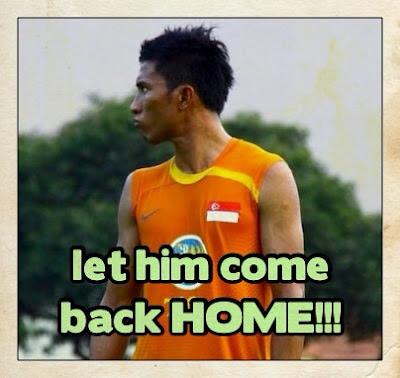 Never mind what were happened in the past, shouldn't "Ah Long" be given a chance to work his magic to chant the crowds back?

Just hope those bureaucracy procedures would not hinder the process with the transfer windows set to close tomorrow - 29th June.
logged down by Ko Po Hui at 02:30:00