[Media Information] I.T.E. BOYS GO THROUGH TO FINALS - BUSINESS TEAM DO THE BUSINESS IN STYLE

By Ko Po Hui June 20, 2012
(This entry is based on the media release issued by the Football Association of Singapore with images depicted provided by the said organisation.)

Singapore, 19 June 2012 - Over the years the H-TWO-O Ultimate Champions League has grown from its early days, based on the theme that ‘football is for everyone’ to what it is today - where players from Secondary Schools, Polytechnics and Institutes of Technical Education are bestowed the opportunity to showcase their talents in this free tournament and bid for one of three chancesto see Manchester United play in the English Premier League.

The objective of the event includes fostering youth development and unearthing raw talent that are unnoticed, while also encouraging racial harmony by mandating teams to comprise players of diverse ethnicities.

In addition, the players can also earn a chance to join the H-TWO-O Ultimate Dream Team, with emphasis on the performances of the best three players, based on their character, discipline and football aptitude.

Youth football development is a worthy objective as raw football talent is being identified, with scouts and coaches from among the S.League fraternity attending the games from the early stages, as they seek to identify players who may have been previously overlooked.

The event, in its third year already, follows on the back of a successive campaign in 2011. 56 teams from ITE Campuses Macpherson, Yishun, Tampines, Balestier and Bishan slugged out. This year, the H-TWO-O Champions League has grown significantly, with Secondary Schools and more ITE Campuses joining in, including ITE West Campus (Choa Chu Kang).

"It has been a meaningful three-year journey, and this year, the H-TWO-O Ultimate Champions League has burgeoned in terms of participation. It is very well-received by both students and schools alike, as it provides young football enthusiasts with an avenue to strut their football skills; where they might be talent spotted to win a trip to Europe, or to join the prestigious H-TWO-O Ultimate Dream Team. We have seen some great talents displayed on this platform so far, and I'm sure they'll go very far in their football pursuits." Said Ms Wong Lye Yin, Senior Marketing Manager of YEO's.

A first-ever visit to play at Jalan Besar Stadium on Thursday 21st June is the first reward for the four teams drawn from the Institute of Technical Education (ITE) who competed in the H-TWO-O Ultimate Champions League (ITE) series – which concludes at the prestigious venue.

The finals will be held prior to the LIVE game between Tanjong Pagar United and Albirex Niigata(S) in the S.League, of which YEO’s is the co-title sponsor.

The event, in its third year already, follows on the back of a successive campaign in 2011. - already mentioned above

They will, as Group 1 winners, meet the runners-up from Group 2 at ITE College Central MacPherson, Fitness Training, from ITE College West at Choa Chu Kang. 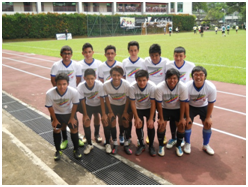 Business Team (pictured above), captained by centre-back, Syakir, with able support from free-scoring striker and vice-captain, Syed Khairul, won all of their matches in both the opening round and the Regional Finals’ group stage.

"We had 12 players in our squad, drawn from all the ethnic groupings (as stipulated in the rules of the competition) and we bonded very well together.

"We had eight clean sheets altogether and even if I contributed four goals, it was mainly a big team effort that carried us through. Our bonding made a huge difference, I think." 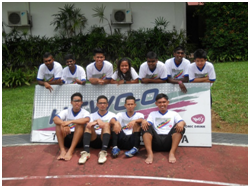 The runners-up in their group Everlast (pictured above), from College East at Simei, were no slouches either.

Led by captain, Kenny Fondey, their centre-back and with central-midfielder and vice-captain, Hakim Mashim, also firing the team, they managed four wins out of five. Their only loss was a slender 0-1 deficit against the all-conquering Business Team.

"We let that game get away from us, we underestimated them as it was only our second game," Kenny said, "and we had no idea how good they were.

Under the rules of the competition teams have squads of up to 12 players, with nine-a-side in every match and rolling substitutions over the 14 minute length of the game, with only one period of play.

"We’d never met or played together before this event," Kenny revealed.

"We only had one training session before the games, but we bonded very well and we had a good team manager working with us, Siti Hawa, who has been with the Women’s team at ITE College East for two years.

As runners-up in Group 1 they will face Group 2 winners, Villas from College West at Choa Chu Kang. 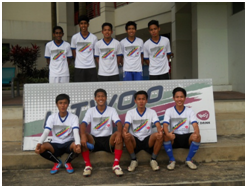 Villas (pictured above), who had impressed in the earlier round, staged at the Choa Chu Kang campus, brought their good form with them to ITE College Central MacPherson.

Villas, led by Hazwan Jani, with Ramdan Yusri in support, had an eleven-man squad and emphasised a strong work- ethic when discussing the secret of their success.

"We worked mainly on our skills, once a week, as much as fitness," Hazwan revealed.

Villas, like Business Team in the other group, were unbeaten all the way through. 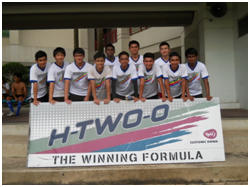 Finally, Fitness Training (pictured above), a team all neatly attired in their class uniforms when not playing, was convincing runners-up. However, they were disadvantaged by the late withdrawal of another team, which meant most of their matches were bunched together in the latter stages of the day’s programme and they had to double up more than once.

Their captain, Ashrul Syafeeq, a central midfielder, was not going to offer that as any excuse, however.

After drawing their second match in a row, with very little break between either outing, his team, with striker and vice-captain Furqaam chiming in with three goals in earlier matches, just could not break through the well-disciplined Villas defence, in spite of having scored four in an earlier game.

‘Fitness’ was another team to be unbeaten in the tournament to date, albeit with draws in three of their nine outings spread over the two days of competition.

"We won four of our games last time and only drew one," said Ashrul, "but team-work was what got us to the Finals I think.

"We are all class mates so we are already well-bonded, but playing at Jalan Besar Stadium is going to be another experience altogether for us and we are all looking forward to the H-TWO-O Ultimate Champions League Finals.

The three MVP winners will be picked and presented with their English Premier League Packages right after the finals; prizes courtesy of YEOS. The prize presentation to the Champions of both the MOE and ITE Categories will be done during half-time of the S.League LIVE Match on 21st June.