[Instant Reaction] We are OUT.... Vietnam 1-0 Singapore 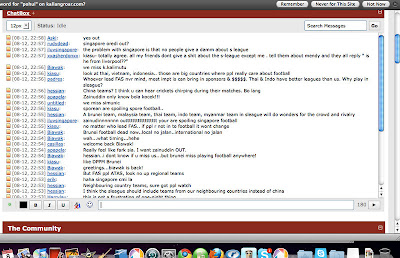 The public anger is widely expected after the final whistle was blown (as pictured above - a screen grab after the match from "Kallangroar.com" ).

Who could blame the fans for feeling that way, after all, in what it seen as the last hope to preserve that sense of "national prestige" after the loss of the three domestic titles to the foreign clubs, the Lions were knocked out of the biennial regional tournament by Vietnam and saw them qualified together with the unfancied Filipinos.

From what I gathered according to SMSes I received from friends back home, the decisive strike was due to a quick counter off our corner and caught Hassan Sunny on "no man land" before the end of the first half.

I felt I should not comment on the performance when I was not able to catch the game, due to pre-arranged circumstances.

Nonetheless, the exit from the Suzuki Cup should probably seen as the BIGGEST setback for local football this year.

And taking this opportunity, I would like to say THANK YOU to Ruiliang, Yusof Ibrahim and Paul Green for their SMS updates on the match.

WE SHALL BOUNCE BACK FROM THIS SETBACK, IF WE STILL BELIEVE WE CAN DO SO, UNLESS YOU GUYS HAVE GIVE HOPE ALREADY...