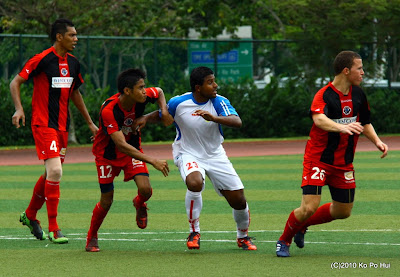 The 3-0 scoreline of this friendly fixture played on the field at the Meridian Junior College in Pasir Ris shouldn't be raised too much a concern for both visiting Sabah FA (in white jersey) and newly-named Hougang United (in red-black striped outfit).

After all, both teams are in the midst of their preparation for their upcoming season, but the only difference is the Malaysians are already several levels ahead of their Singapore counterparts in getting themselves ready. 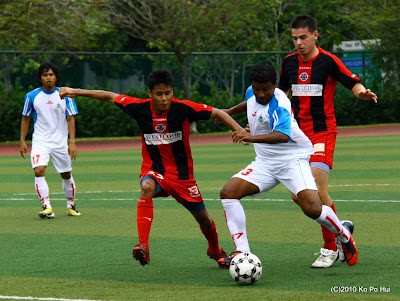 "We started our training session on 1st November and we had undergone some solid training for the past six to seven weeks." said the SabaHawks' Australian coach Gary Phillips after the match.

"And I'm pleased with my team performance and would be glad if we can continue to play like this.

"But it's still early days ahead with some fine-tuning to be going as this team will be facing a tougher challenge against big teams like Selangor, Kelantan."added the coach who guided the North Borneo side back to the top flight of the Malaysian football after a five-year absence. 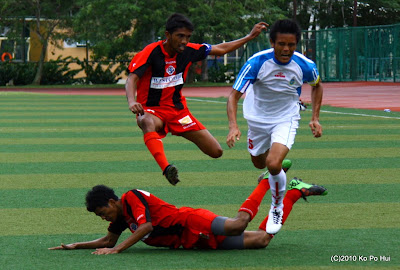 Meanwhile, Philips's counterpart Aide Iskandar wasn't too worried by the one-sided scoreline as he revealed that his squad just begun their pre-season training on Monday.

"As compared to Sabah's preparation, who are ahead of ours for four to five weeks, we only assembled our squad not that long ago and it's still too early to gauge anything out of it, as our fitness level are not there." explained the former Lions' skipper.

"There may be some plenty of works for us to do, but I believe this season we are having some quality individual players, while I'm still on the look out for a centerback." said coach Aide. 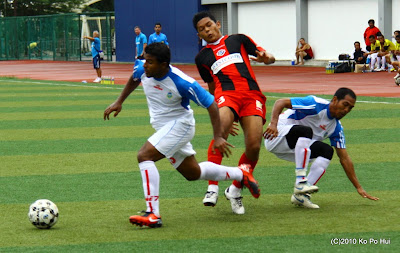 Looking to fill up the void left back by Japanese star Kenji Arai and ex-skipper Nor Azli Yusoff (both signed for Home United) is understandable as the team, formerly known as Sengkang Punggol, was guilty of leaking in goals in barrow-load, until the recruitment of Arai in the mid-season helped to stabilize the shaky defence.

Which is why Lebanese international Mounier Raychouni was spotted in the Cheetahs' colours as he is currently in Singapore for a trial with Hougang United.

According to the 24 year-old's curriculum vitae forwarded by his agent Marco Guimaraes of Trebol Sports International, the former Lebanese powerhouse Al Nejmeh star not only fit in perfectly as a center defender, but equally comfortable in positions such as being a right-sided defender or midfielder in both defensive and attacking roles. 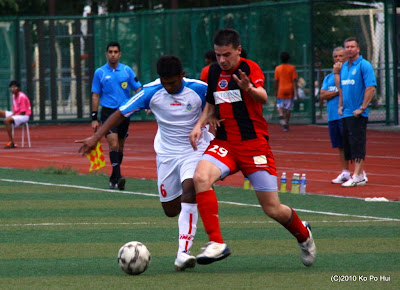 When asked his preferred position, Raychouni (pictured above wearing the "29" shorts) said: "It's up to the coach to decide where he think is the best position for me in the game and I will respect his decision."

"So far, it's been alright for me in terms of the weather as it's comparable to Lebanon where I used to play and I think it will get better for me to perform better once I get used to it." added the German-born twice capped Lebanese defender.

The visiting Sabah FA will be taking on eight-timed S.League champions, SAFFC on 20th December at the Jalan Besar Stadium before wrapping up their preparation tour in Singapore.