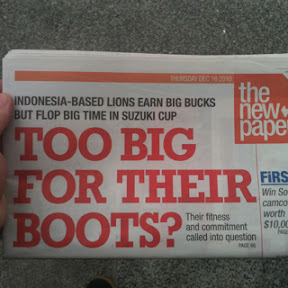 So it just don't really help much to go south, except for the bit of fake glamour, adulation, etc.

Just as I mentioned a few months back, if all this is worth the while? And below are some replies when I posted this snap on this blog's FB group.

"I cant help but agree with their (TNP) assessment this time round... the defence pairing of Bai (Baihakki Khaizan) n Precious (Emuejeraye) was bad... Ridhuan (Muhamad) and NAS (Noh Alam Shah).... they really think that they are the "STAR" players...but their performance is nothing close to "star" quality....." Ong QZ, who seems to agree with what TNP mentioned

"I think the media is going on a witch-hunt when they indirectly, should partake part of the blame. I think its boils down to the maturity of the Singapore players, we cant just blame the ISL for all the woes...example, look at the Indonesian team..they played much better even though they got majority of players in the ISL. same thing for even Vietnam and even Myanmar. their league set up might not be a 'professional' as Singapore's but their hunger kills everything!" B Khoo, who suggest there are other factors as while

"Football only gets their free coverage when the media feels like criticizing. I see little efforts in local media covering our players' performance at ISL - which I believe that will help in publicizing how the S.League's exported players are doing. The Thai media had a full time reporter here many years back when there were many Thai players plying trade in S.League." - D Lim