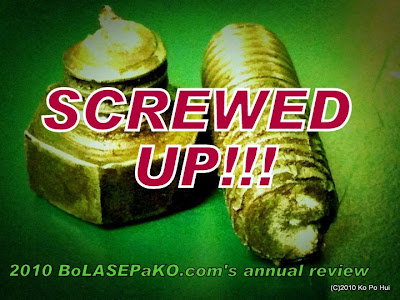 Introduction
The TODAY's exclusive on the 16th December ('S-League needs major surgery') seems to have triggered a wide range of discussions on the flaws on the local football.

A break from past template of reviewing the events of the past year, I selected a few topics that caught my attention and blogged my thoughts on them instead...

Screwed1
Did Home United messed up itself at the end of the day by allowing Shahril Ishak (pictured below) to leave at the most critical juncture of the season?

While every effort had been made to offer its former skipper a much-improved contract that would have seen the inspiring midfielder being the highest paid at the club, the Protectors' management were helpless, but to see its prized possession left for Indonesia.

The absence of the national midfielder was in evidence as Home United's form took a beating following his departure.

And after a few scary moments only to see their best title hopes in recent years faltered away after a one-all draw with Gombak United at the JBS.


Therefore, it's not hard to see why question be asked why would the club took such a big decision to let go such a key player at that point of time?


It also highlighted the flaws in the contractual obligation of players to their clubs that allow to players to join other clubs, so long the desire of the particular player is determined.

It doesn't matter if transfer fees are being paid in those recent transfer involve Khairul Amri (from Tampines Rovers) or Goran Subara (Gombak United), the point is that not matter how many dollars were being paid it would never compensate for the lost title hopes thrown away by their own doing.

Screwed2
In a match that did not have any deciding factor to determine the outcome of the title race, but had both the Young Lions and Beijing Guoan Talent thrust to the limelight for the wrong reason.

The mass brawl was followed by some manageable skirmishes that took place during this hotly-contested fixture between the two sides had catapulted the league into an undesirable worldwide fame at the end of the day.

Not just that unwelcome fame, but it was regrettable that this undesired event had blown out of proportion that it was not just a fight that took place on the field.

But mainly because one of the involved parties was a foreign team, which has long been the bone of contention for the fans who by large loathe their existence in the league and to larger extend in this country.

Screwed3
Okay, so what they had won the S.League title on their debut year?

The reality struck them hard as fast they got their hands onto the championship trophy with chairman-cum-CEO Johan Gouttefangeas was quick to admit the "dismantle" of this championship-winning team is inevitable with some local clubs already shown keen interest in roping some of these French players. 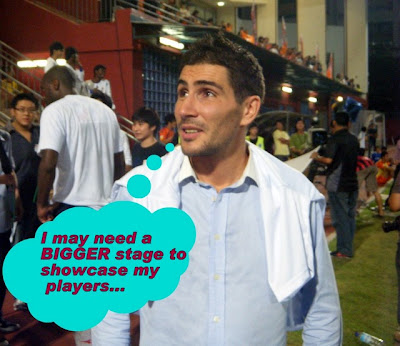 But perhaps the harshest reality would be the fact that with the pre-existing rules stipulated the “S.League Rules Book 2010”, Etoile will not be featured as Singapore's representative in any of continental tournament (hope they still remember that).


“The S.League Champions and the Singapore Cup Champions shall participate in the competitions organised by AFC (Asian Football Confederation) and AFF (Asean Football Federation).

…. if the S.League Champion is a foreign-based team (namely Albirex Niigata Singapore FC, Beijing Guoan Talent FC and Etoile FC), then the next highest-placed local team in the S.League shall represent the S.League in the AFC and AFF competitions.” Rule 11.5 of S.League Rules 2010.

Therefore, for this group of French players, unless they are lucky enough to be spotted by clubs from bigger regional leagues randomly, they will never get a chance to parade their capability on a bigger stage.

Screwed4
When I first met Aliff Shafaein in person that was in 2006 Singapore Cup Final at the old National Stadium. 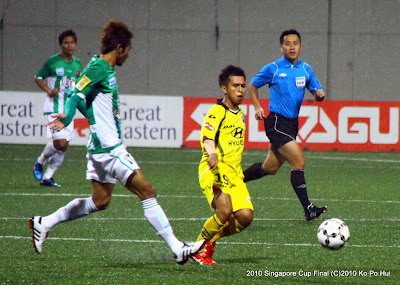 It was his moment of glory as he stabbed home the late winner to see Tampines Rovers beat Chonburi FC to win the Cup and I said this to him, "Hope to see you in the national team."

Unfortunately, the diminutive midfielder affectionately known as the "Little Master" was constantly overlooked by coach Raddy and I never shy away to say Aliff should be in the national team for his ability to shackle any tightest defence on his day.

I repeated my belief on Aliff prior to the Cup Final weeks ago over a meal with a friend from the media and eventually witnessed what could be his final game (pictured above against Bangkok Glass) for the time being when it was reported he was caught for some driving offences before the game the following day. Could you image the jaw drop expression when I got a SMS (pictured above) from a friend who texted me?

Screwed5
I once asked a visibly upset member of the blog facebook group what solution he would have for us to remedy the shortcomings Singapore football is facing.

Having reiterated all the shortcomings in his previous postings, that was only one thing that I caught and worth attention.

Sentiments like this is not uncommon after any kind of situation when things went wrong.

It range from calling for the drop of unperformed players, sack the coach to the revamp of the league and the whole football system, but in the end what has been done and change?

Other than the launch of the "Strategic Plan", the implementing of the new football syllabus and the spark provided by the Little Cubs during the YOG, nothing significant had done.

Although, we fans and some media are equally guilty for finger-pointing too much while hesitant in times to roll up sleeves to fix the woes besieged the league.

Like mentioned, all parties have a role to play in lifting up the league profile, but sometimes we are just clueless as problems are too massive

Conclusion
I'm sure all of us had been through those "problem solving" course, right?

As whining is never the solution and I know a lot of people had already thrown the towel and walked away, but this is not going to solve the problem.

A fresh injection of ideas and finding the bit of motivation to get thing going is the priority now, so how do get start?

Start from the "Fishbone" technique we learnt from those courses and we should able to get a thing or two from it... 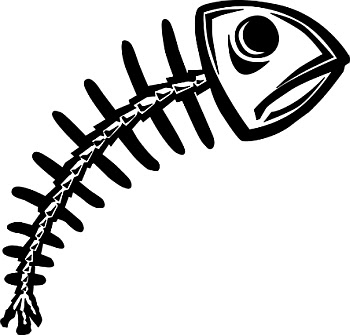 Local football could be saved by a "Fishbone", who knows?
(Picture Credit: Opera Chic)

To say I am not disappointed of what happened the past year in local football is something would be against my conscience.

Having involved in the scene for more than a decade and seen much of the things remain status-quo or getting worse is something really frustrating.

I would say others would have quit and wash their hands completely to stay clear of local football.

Yet there is a small core group of loyalists that still undeterred by those scorns or sarcastic remarks by their family, peers and strangers.

Kudos to these folks for their undying belief to the local football and for me to walk away now would deemed something irresponsible of me too.