INTRODUCTION
Ever since we are made known that Mediacorp Channel 5 decided to DELAY telecast, instead of LIVE telecast the crucial AFF Suzuki Cup tie between Singapore and Vietnam on the 8th of December, there are fans voiced their disappointment over the broadcaster's decision.

While it was made known that the time-slot for "NEWS 5 TONIGHT" program being the reason for not being able to live telecast of the match. However, as avid Singapore football supporters, we sincerely hope the broadcaster can reconsider their decision and allow the thousands of fans out there to catch the game LIVE on the terrestrial channel.

The desire of we, the fans, can be strongly felt on various feedback channels such as: "Twitter", "Facebook", etc. (as illustrated below) 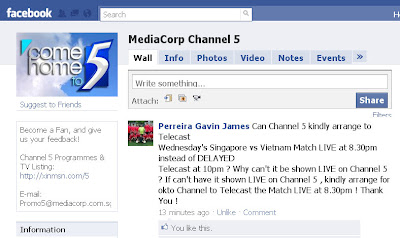 Fans having posting appealing message on Mediacorp Channel 5's Facebook page to plead the broadcast to reconsider the decision. 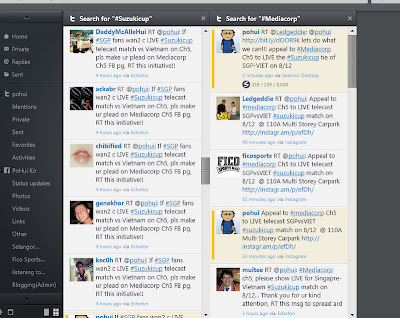 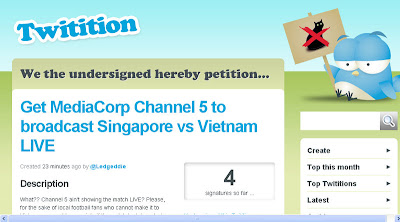 As illustrated above, some fans get their act together to make their voice heard in hoping the broadcaster would reconsider the decision over the telecast of the Singapore-Vietnam on the 8th December.

While we understand the difficulties involved in the process, but we sincerely hope to see the light at the end of the tunnel.

Thank you for your kind attention.

THE FINAL DECISION THE FOLLOWING DAY...
To my surprise and gratification to see the appeal had generated much interest and response. Unfortunately, at around 1830hrs (Singapore time), Mediacorp announced a short statement on its FACEBOOK page (as illustrated below). 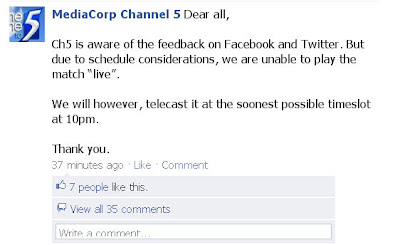 "It is a regrettable and disappointing decision, but nonetheless I'm glad that in a space of a day the appeal had generated much interest and support from like-minded individuals and local football supporters. Thank you" - Ko Po Hui (7th Dec 2010 at 1918hrs - Singapore Time)