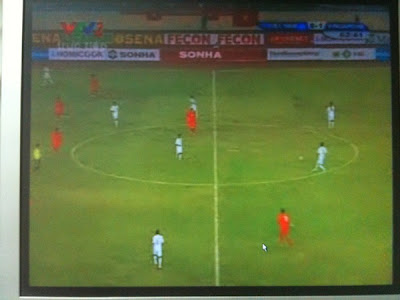 (Picture above) Screen-grab off my monitor of the match
Home United's Shi Jiayi scored in the 25th minute after he slammed home on the first attempt off an Alek Duric's laid ball just inside the Vietnam's box.

Gach Dong Tam Long An's Phan Văn Tài Em levelled in the 76th minute, when he duly finished up the mess caused in the Lions' six-yard after Geylang's Adrian Dhanaraj failed to clear the ball upon received a ball from the left flank.

It was a match that saw the Lions played rather defensively, by trying to build up their attacks deep from their own half.

The Lions did had a chance to double up the scores when an attempt hit the upright in the 87th minute (but cant tell who was it as the image was poor).

SINGAPORE, 04 November 2010: Singapore held host Vietnam to an impressive 1-1 draw in the VFF Cup at the My Dinh stadium in Hanoi.

Following their formidable combination against DPR Korea on Tuesday, midfielder Shi Jiayi and forward Aleksander Duric were in the thick of the action once again, this time Duric turning provider for Jiayi to give Singapore a well deserved lead in the 24th minute.

The home side continued to press on after the break and were rewarded with the equaliser courtesy of Phan Van Tai Em in the 76th minute.

Singapore finished the game strong and came agonisingly close to grabbing a famous victory in the dying minutes after Fazrul Nawaz saw his headed attempt hit the upright in the 87th minute.

Coach Radojko Avramovic was content with the result and proud of his boys’ showing in the last two matches.

“As we expected, Vietnam played with a lot of movement and quick passing but in the end I feel we were unlucky not to win. We came very close with Masrezwan’s goal disallowed and Fazrul hitting the bar. Considering that some of these players are with the national team for the first time, I feel that they have done very well here.” said Avramovic.

Singapore will play against the Korea Republic Under-23 team on Saturday in their last match in Hanoi.

“The boys have done well in the last two games but I expect the next game to be the toughest. It has been physically demanding on the players in the last few days and in my opinion, the South Koreans are the best team in this tournament.” concluded Avramovic.