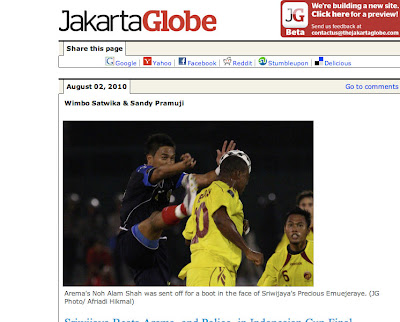 Some of you have already known that Sriwijaya had won the Copa Indonesia last night by beating ISL champions Arema Malang.

Interesting fact is that three Singaporeans were featured in that match with Precious Emuejaraye for the victorious Palembang club, while Noh Alam Shah and Ridhuan Mahamud for the East Javanese side. 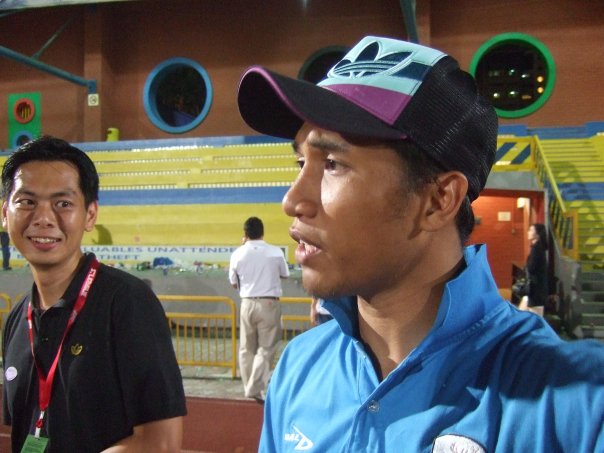 As rumors have been flying around and it's confirmed (according to sources) that both Ah Long (Noh Alam Shah - pictured above) and Ridhuan had played their last game for the "Crazy Lions" after talks apparently broke down over their messy contractual issues.

All these came at a time when speculations are rife that there might be another raiding exercise carried by the Indonesian clubs on notable Singapore players by dangling fat cheques and the prospect of playing in front of the big, passionate crowds (as depicted below).

Persija's supporters at Solo (courtesy of Jakarta Casual TV)
Ironically, when Sriwijaya were in town months ago for the ACL play-off match against SAFFC I was told their expenditure from flights and accommodation were fully bored by the Warriors because of financial difficulties (must be one of the reasons why Duric did not end up in Palembang after all).

Sriwijaya's team shoot before their ACL play-off match against SAFFC.
On a separate story, it was revealed that Dutchman Roberts Alberts (former Tanjong Pagar Utd and ex-Home Utd coach) and several players threatened to quit Arema over unpaid wages months back.

Once, a friend asked me what's my take of the "second raid" that's going to be taken place.

"For experience sake, yes, why not as you are talking about playing in front a big, passionate crowds."

"However, with the financial instability that some Indonesian football clubs are known for, our guys must think really hard before moving down south." I replied.

Last thing I heard according to this link here, which gives a good break-down account of the financial losses "Ah Long" had made since leaving Tampines Rovers for "Singo Edan" (the nickname of Arema in native language), that he might be heading to Thailand.

While it was reported that "Ah Long" had tempted his fellow Lions with the clips of the passionate "Aremania", I'm dead sure he will also tell them the downside of it and warn them to avoid the same mistake he made.
logged down by Ko Po Hui at 22:15:00