WILL U STILL THERE FOR THEM? - picking up the pieces...

BEFORE
So far the response have been positive on the Little Cubs' epic performance over Montenegro. It was such a long time I last heard of something said in unison about the performance of any of the national teams.

Kudos again for the Little Cubs and credit to the coaching staff headed by Kadir Yahaya for the wonderful execution of the tactics on Thursday night.

Of course, amid all the euphoria over these boys, it also important to like what coach Kadir said the essential "to keep the feet on the ground." 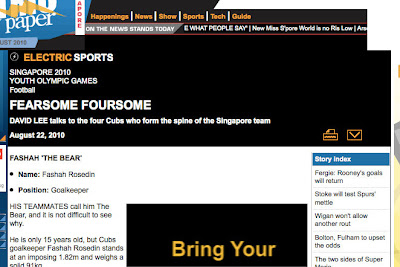 (Pictured above)Headlines like this above epitomized the "feel good" feeling towards the "Little Cubs"
Yet, so much hype on the YOG football team, hope the little cubs can cope with the expectation and media should balance their writeup on the little cubs without over hype the things.

Hope the little cubs can play their normal game amid all hype around them, as unlike the last game they are now the favorite against Haiti.

Our Little Cubs (pictured above - screengrab from TV) given everything they had in the game against Haiti.

A slip at the crucial moment saw the Caribbean scored the only goal of the night to jolt the hope of the nation, while we had several chances throughout the game, but the clinical touch in front of goal eluded us.

Kudos to the Haitian for the victory, but in a rather less-than-desired manner.

BUT the most important thing is for the fans out there - WILL YOU BE THERE FOR THE TEAM AFTER TONIGHT?

Here are some of the responds I gathered after I posted the question on my Facebook account with the screengrab.

they need our support more than ever now. it's easy to support winners but these young boys have shown enough spirit to earn my respect and support despite the loss today. they have given singapore something precious and rare - an untainted display of passion for the country on the field. this is the moment for singaporeans to show they are not just fairweather fans. let's continue building on the revival of football passion that the cubs have ignited. boys, keep your head high, for you have done your country proud! - C Ng

They played well against Montenegro and already have an eye on the final when they thought that Haiti is just a stroll in the park. Well back to ground zero dear Cubs, the ball is round and don't under estimate your opponent. Take this as an experience and learn from it. - Y Ibrahim

I just think that in our thirst for singapore football glory, we blindly placed our hopes on a group of schoolboys. i'm not belittling them but it is essentially kids football. it just got blown way out of proportion after the last match against montenegro. it is what it is and we should have let it be, but it evolved into a monster especially in the media...

But as consolation we can take heart that support for local football isn't dead. which country in the world will interrupt regular programming at prime-time to show their schoolboys team play live or have public screenings! - B Kunju

They, more than the rest of us.What they need right now is our support and get that medal which has our name on it.

We are all disappointed with their performance tonight but this team more than any other this YOG captured our imagination.

This team showed us why the Youth Olympics matters.Its bigger than winning.

It's getting a country together and showing us why sports is the greatest teacher of them all. They owe it to us getting that medal and we owe it to them being there this Wednesday. - V Subramaniam

The boys have worked really hard and we should not be faulting anyone.
They are after all 15 years old and time will progressed them. To... all fans out there, if you happens to bump into this kids, show them your support. They will always have mine no matter what. Cheers! - H Razzak