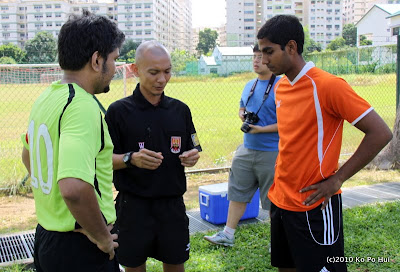 To the players of both Orange County (pictured above, in orange jersey) and Team Beyond Imagination (lime jersey), it was something rather unusual for them when they saw a sudden surge of "intruders" turning out for their Sunday League fixture at the Bedok North Secondary School. 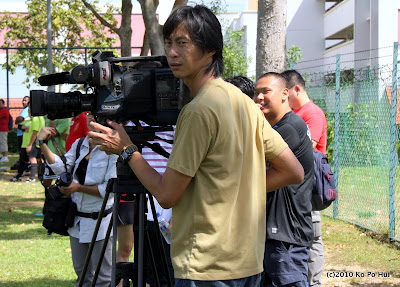 (Pictured above) Rare mainstream media coverage on a Sunday League game.
Beside those from the media and their D2DLeague coordinators, making their appearance at the school compound nested inside the Bedok Reservoir Road estate were three former national skippers - Fandi Ahmad, Nazri Nasir and Aide Iskandar. 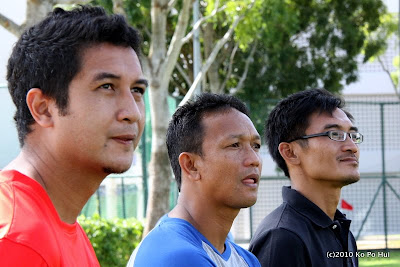 (L-R) Aide Iskandar, Fandi Ahmad and Nazri Nasir watching the game from sidelines.
Under the hot scorching heat, the two teams slogged out against each other and with Team Beyond Imagination claiming a 2-1 victory over their opponents on a bumpy playing surface.

Following the end of the match, it was then made known to the players that the three former Lions skippers were actually on a scouting mission launched worldwide by Nike. 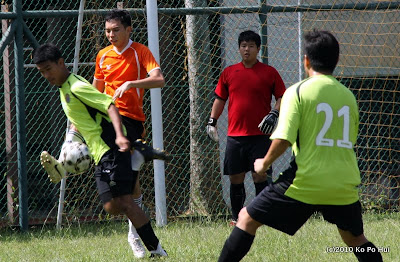 Both teams fought hard under the hot sun.
Called "The Chance", the talent scouting exercise will see a panel of coaches shortlisting a group of amateur players from the age of 18 to 25 years old from various amateur league matches being played around the island during the selection period from now until 15th September. 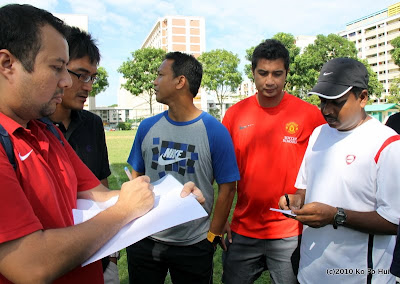 The three former Lions skippers shortlisting their selected players.
Following that, shortlisted players will be invited for a four-day trial from 15th to 19th of September.

The top 30 selected players will take part in a Final Trial on 2 – 3 October, which will see the top 18 players playing a friendly game on the second day of the final.

The winner of the Singapore competition (out of the final 18 players) represent the Republic to complete for the exclusive eight slots being offered by the Nike Academy in London with other 99 candidates from other countries, following a trial with Arsenal manager Arsene Wenger.

This group of eight players will eventually embark a year long, full-expenses paid training in this high performance training program, supported by the English Premier League, starting from July 2011. 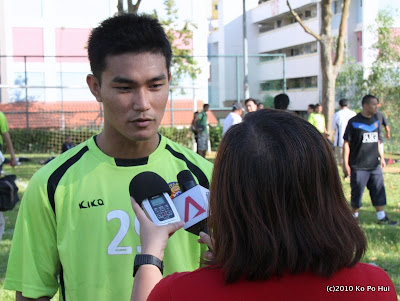 Muhd Helmi (pictured above, being interviewed by Mediacorp) was one of the selected players during this unique kind of scouting process and promised to give him best during the upcoming trial.

"I will definitely give my best during the trial, as this is a great opportunity for me to develop as a better player." said the 22 year-old civil servant who started playing the game at the age of five and singled out his idol Fandi as his source of inspiration. 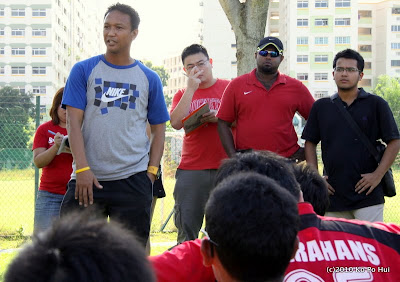 Fandi addresses the group of players after the announcement of the shortlisted players.
"I believe this campaign will definitely help to unearth some raw talents out there and hopefully they will get a chance to play in Europe." said Fandi following the match. 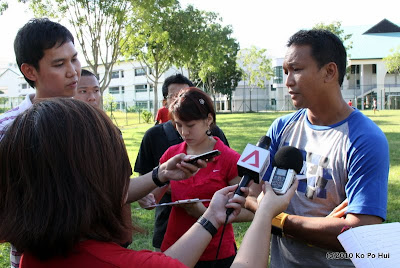 Fandi talks to the media after the scouting session.
When asked what are qualities they are looking for during the selection period, the former SAFFC coach said:"Just play your normal game and for your team, you need not have to perform any "bicycle-kicks" to gain attention, but they must learn to express themselves during the match."

(P.S: Unfortunately, Fandi did not divulge more details on his linkup to the assistant coaching post in FC Groningen and his two sons' training stint in England which he felt would be more appropriate when the time is right, when sidetracked by the media.)

For more information or to register for ‘The Chance", visit www.nikefootball.com.sg
FOR MORE PICTURES OF THE LAUNCH OF "THE CHANCE", PLEASE CLICK HERE...
logged down by Ko Po Hui at 20:07:00