Keep Up the Good Work, Guys!!

By Ko Po Hui August 26, 2010
The Youtube Clip of the highlights of the match...
It was indeed a roller-coaster ride for the group of 15 year-old boys that formed the National U15 football team that took part in the Youth Olympic Games.

After two emphatic victories in the group stages over Zimbabwe and Montenegro, the expectation was at an all-time high on the "Little Cubs" to aim a shot at the elusive gold medal of the football competition.

No one can blame the kind of expectation and hope, after all these boys did just enough to captivate the nation that is starved of footballing success in the recent years (yes, we were that close to knock the doors to Doha and only after a successful appeal that the Cubs are granted the ticket to Asian Games in November).

So how could we expect that every hope was crashed to the earth when the boys lost to the unheralded Haitian in the semi-final.

As always, fingers went pointing around with players, coaches, media and fans putting the blame on each other.

But at the end of the day, like a phoenix raised from the ashes, the Little Cubs redeemed themselves and beat the Montenegrin in the third fourth placing match to clinch the bronze medal of this inaugural competition. 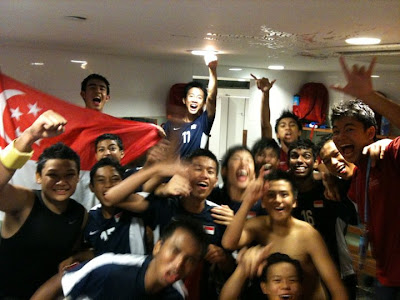 (Pictured above) The "Little Cubs" in jubilation (photo credit: Mr Yazeen Buhari)
Generally speaking the second win over the Balkans earned some praises from some thoughts I gathered from this blog Facebook Group (as detailed below).

We have good boys. But we have to credit the coach as it has been a major transformation from the AYG team to the YOG team. They excelled this time round with grit , determination and fantastic positional and possessional play. Thumbs up to (coach) Kadir (Yahaya). - K Asyraf

Confidence has grown enormously since then and skill has been going ahead by leaps and bounds and of course Kadir must take the, errr, Lions' share of the credit.....no tears tonight, ...except tears of joy... - P Goodwin

Although, there's one reader who remained cautious and hope the team "don't get carry away" following the bronze winning showing.

Don't get too carried away by the result taking into account the standard of football in YOG and the fact that we lost to Haiti, a team who get to train only last two weeks and beating Montenegro is no big deal (as) they are not the world cup nation unless it's the used to be Serbia Montenegro.

I was hoping that we meet Bolivia in the final but losing to Haiti and the way they played under par I rather not they meet Bolivia.

Lastly this YOG did managed to bring the nation together and that is the ultimate motive of having YOG here in our land. Hopefully the support The Cubs had won't stop there. - Y Ibrahim

Indeed, "Y Ibrahim" had mentioned this YOG had brought the nation together and I agree with him that let's hope the support don't end there with the concluding of this Games.

I would sincerely urge all necessary efforts to keep this team intact for the years to come.

Let's not forget with the Strategic Plan that was launched months ago and the good showing from the "Little Cubs", we are actually heading on the right note (hope I'm not "carry away" for saying that).

Keep Up the Good Work, Guys!!