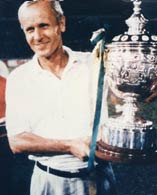 I am not sure how many of you know who he was, but the fact is Milous Kvacek was once, erstwhile national coach of Singapore back in 1992.

Despite his short and tumultuous tenure as the Lions coach, the Czech coach left behind a legacy by introduced the formation of “3-2-3-2”, which was a weird tactic unheard of among the local football fans in those day who were more accustomed to “4-3-3” or “4-4-2”.

Not only that, the Czech coach was also credited to unearth players such as Zakaria Awang, Steven Tan, Toh Choon Ming to the national team during his two-month stint.

It was a time when Singapore football was facing one of its darkest periods after a disappointing campaign in the 1991 Malaysia Cup season, when the Lions failed to follow up from its successful run a year before in 1990.

So when the news of the appointment of the Czech tactician came about in early 1992, it simply got the local fraternity exciting with his tough and no-nonsense approach that he once famously said to those selected few (aka the Lions),

You don't consider yourself a star player, unless you are someone like Maradona or Gary Lineker.

Such a high esteem the Czech coach commanded then that it was said whenever the Lions were having their training sessions at Jalan Besar, it attracted quite a number of local coaches who hope to pick up a thing or two from those sessions.

However, the FAS had a different approach on Kvacek's role then with the game's local governing body wanted him as a “Super Coach”.

Beside being the coach of the Lions, the FAS also hoped to tap on the vast experience of the Czech coach to “coach” the local coaches as well, which was something Kvacek, in my opinion, found it “too much to handle”.

Coupled with several other issues, such as the “boot” issues, etc., the stormy affairs reached its boiling point when Kvacek resigned and left the $7,000-a-month job at the end of April.

For a brief period in 1996 S.League season, the Czech did return to local football as the Technical Director of SAFFC in the Pioneer Series. 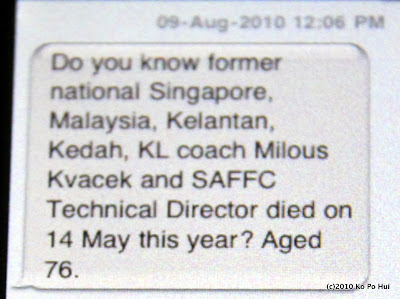 Since then, nothing was heard about him until this SMS (pictured above) that came about this noon.

(Credit: Many Thanks to Mr Cheng Tim Nee who alerted me of this information and some relevant details provided in this entry.)

(Disclaimer: Whatever written in this entry is based on my recollection and to my truth knowledge. Should there be any mistake, discrepancy related to whatever is written, please feel free to point out, thanks)