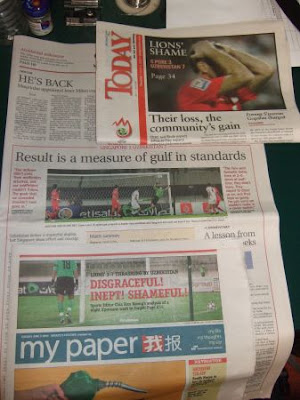 “The Straits Times” shown some mercy when they lauded the "courage and effort shown", whereas its sister paper, the free tabloid “Mypaper” screamed "Disgraceful, Inept, Shameful!", while the rivalling “TODAY” depicted a player looked like Aleksandar Duric or Fahrudin Mustafic holding his head in despair with the tag "LIONS' SHAME".
Those were the reactions from the mainstream media following the national team's biggest home defeat in their competitive history.
While I don't blame the media for splashing that kind of eye-catching headlines across the front-pages since they were telling what we saw with our own eyes.
Although, all these happened at the wrong timing.
Wrong timing in a sense, these happened when the chips are looking up for the national team, who are slowly trying to regain the faith of the notorious sceptical football followers of this country.
Yes, we were being taught a very good lesson of the game and the Uzbeks truly deserved all the accolades.
Most of the thoughts I gathered from the grapevine indicated the sloppy defending by the players attributed to the downfall of the team.
"They tried their best but the lack of international (match) experience and stamina caused them dearly.
"Also, the team did not shown teamwork and there was not chemistry between Lionel (Lewis - the 'keeper) and his defenders" said a working friend of my.
"But I really enjoyed the way Uzbekistan played their football." said another for his admiration of the attacking play of the Central Asians.
logged down by Ko Po Hui at 20:16:00