Basic to the basic... 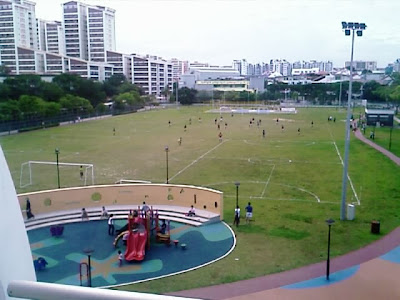 Snapped this picture from the train, while on my way to a game.

Can't remember where it was but that's not the issue, rather one thing that came to my mind was - shouldn't the game be played in the most basic manner like what depicted in the picture?

It seems that most of us seems to forget the most basic element of the game - Having fun.

Sure, I know there's a lot of folks outhere still having their "kickabout" session every weekend around the island, though the saddest thing I can't help but having that feeling on those guys slogging out for a living on the field, those so-called "full-timers".

In a time where money and winning are so important that I wonder if those star players on the field really enjoy themselves like those amateurs having fun on an ad-hoc basis?
logged down by Ko Po Hui at 00:13:00

Email ThisBlogThis!Share to TwitterShare to FacebookShare to Pinterest
Classifed as: Public education, trip