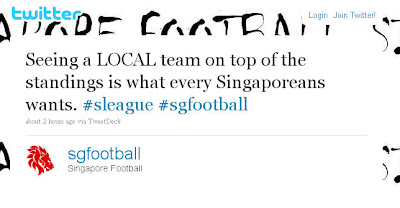 In less than 24 hours the pole position of the league standings changes three times in the Round 6 of the 2010 S.League campaign.

Prior to the "Uniform Derby" at CCK, Home United were holding that position on top of their unbeaten 25-game unbeaten run, only to see that record shattered by their arch-rivals, SAFFC with their former protege, Indra Sahdan Daud playing a pivotal role in created and scoring a goal along the way to place the Warriors at the top for the first time this year.

“A record (the 25-game unbeaten run) like this is always meant to break.” said coach Lee Lim Saeng of Home United after the defeat to SAFFC, while his oounterpart Richard Bok added:"It’s good to be at the top of the table again, and I hope we can maintain that momentum".

Although, that status maintained for just less than 24 hours after the result at the Jalan Besar Stadium when Tampines Rovers came from behind to beat defending champions Etoile FC.

It could a game that went either way for all title contenders as the equation goes like this that if Tampines and Etoile drew with each other, SAFFC will remain at the top of the summit.

But it was looked as if the French would to be usurped the pole from 4th spot to the top, but only to see the Stags came back rather late into the game to snatch all three points from the game.

"Maybe could be the fatigue factor, but it's something I'm not going to reproach my players, as the plan was to play a pressing game." Etoile's coach Guglielmo Arena after the game.

The win, however, is far from over for the Stags as they will head straight back onto to their continental campaign, when it was revealed that the contingent will be flying off to Vietnam on Sunday to play Hanoi T & T on the 12th April.

Commenting on the packed schedule, Tampines Rovers coach Steven said:"We just have to take one game at a time, and so long we are winning we'll not feel the tiredness (of the packed scheduled)."
logged down by Ko Po Hui at 00:35:00