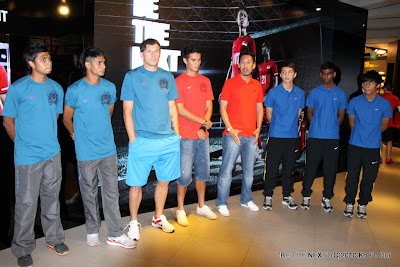 National team manager Eugene Loo (pictured above, third from the right) in his opening address to the experience sharing session between the Lions and the YOG Cubs.

Three YOG cubs - Ammirul Emmran, Dhukhilan Jeevamani and skipper Jeffrey Lightfoot got up close and personal with Lions stars - Aleksandar Duric, Baihakki Khaizan, Fazrul Nawaz, Ridhuan Muhamad in "BE THE NEXT" - another initiative by NIKE, the national jersey provider at the sporting giants' flagship outlet at Wisma Atria. Veteran striker Aleksandar Duric (first from left) shares his experiences with YOG team skipper Jeffrey Lightfoot (on extreme right) with Loo and defender Baihakki Khaizan look on.
"Be The Next" is a campaign specifically targeted at local youth footballers, inspiring them to live their dreams and become the next great footballer of the nation.

The campaign also aims to ignite a sense of national pride that encourages the youth's support for the national team to be the next champion, a goal the national team will certainly be looking to achieve during the upcoming AFF Suzuki Cup tournament this December.

National Team manager Eugene Loo and the Lions emphasised the importance of working hard to achieve the ultimate success, while Loo added that football is a good way to help the youngsters to stay focused and keep them away from any astray activity. 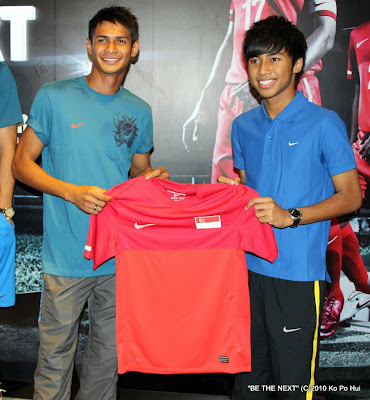 "In order to play for your country and overseas, the ability to self-motivate yourself should start from a young age as it's important to keep motivate oneself to go far ahead." said Arema Malang winger Ridhuan in his sharing session with the YOG boys. 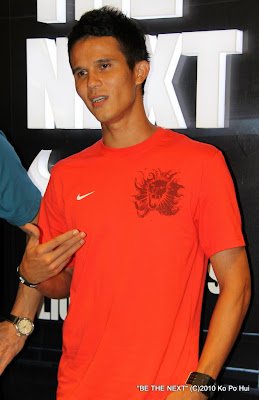 Baihakki switched to Persib Bandung from fierce rivals Persija in the close season of ISL.
"When I was young, I am someone who is lacking of confidence and would always follow what the senior players do, but now playing in the Indonesian League where expectation is high and demanding that it does helps in building up that self-belief in starting any big game." said Baihakki, who is now playing his second season in the Indonesian League.

In conjunction with the regional marquee tournament - the AFF Suzuki Cup, the championship trophy was also in display in the flagship store. 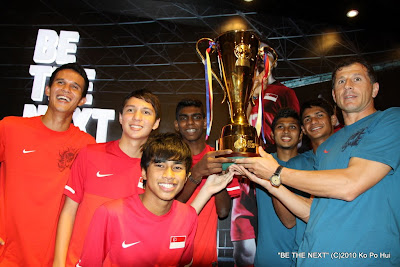 With all event participants hoisting up the trophy for this photo opportunity (hope it'll be ours this time round again).

And the urge to regain the regional supremacy is clearly reflected in Baihakki's words.

"I think we need to do something about it after we missed out during the Asian Cup Qualifiers.

"Also it's been a while we last won something major and we believe we should be able to and have the confidence to win something and personally, I hope we can win the Suzuki Cup." concluded the 26-year-old defender. 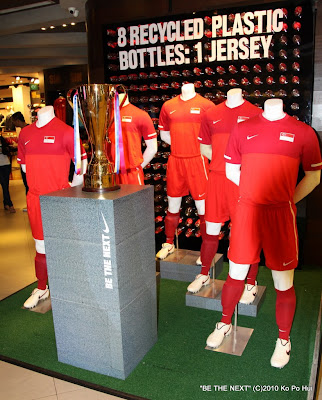 The Lions will now get to wear the same type of jersey made entirely from recycled polyester with eight recycled plastic bottles going into each jersey.

The Lions will take to the field in kits with exciting new designs that are symbolic and inspirational to the team. The Home kit uses the colour red, representing universal brotherhood and equality of men. This season, the distinct design is a dual-tone red jersey, giving a fresh look to the designs of the past while retaining the traditional color that Singaporean fans easily identify their team in.

The Away kit is a throwback to historic jerseys of the past, reminding players how far they have progressed over the years. Using the classic colour blue, which was the first choice colour for the jerseys in the 1970s and 1980s, the blue Away kit reflects Singapore’s identity as an island city surrounded by tranquil waters.